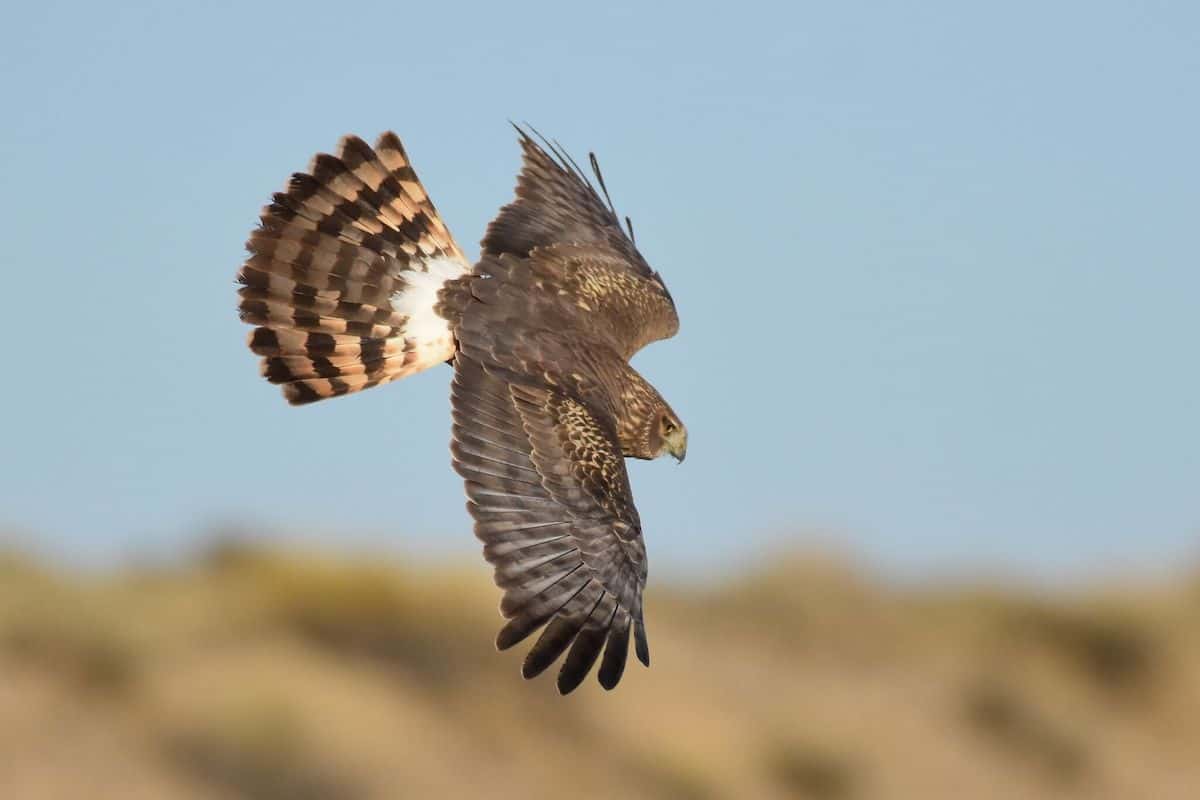 Hawks are a member of the family of hunting birds we call birds-of-prey. Everything from their keen hearing and eye sight to their sharp beak and talons comes together to make them expert predators. There are approximately 16 species of hawks living across the United States. But in this article, we’re going to discuss the 11 species of hawks in Nevada, plus one bonus hawk-like bird.

The common black hawk is rare in the U.S. overall, living mostly in Mexico, Central America and northern parts of South America. However some of them do cross the border into the U.S. during the spring and summer months. While Nevada is not part of their typical range, they have occasionally been sighted in the far southern tip near Las Vegas.

These hawks are a sooty black color all over, with a thick white band in the middle of their tail, and a thinner white strip at the tail tip. Forested areas along streams or river, inside of canyon and desert habitats, is where you can find the common black hawk. They like to hunt along streams and rivers, sitting up in a perch and watching for prey down below. This can include fish, reptiles, small mammals, crayfish, frogs and snakes.

Cooper’s hawks can be found across most of North America, including Nevada where they are year-round residents. Adults have a bluish-gray back, heavy orange barring on the chest, a red eye, and squared-off head with black cap. Immature birds have a yellow eye, brown back and head, and white underparts with heavy brown streaks.

Ferruginous Hawks can be found year-round in parts of southern Nevada, but for most of the state they are present for the summer breeding season. They tend to stay in open spaces like fields and plains, soaring above looking for small mammals or hunting on the ground.

Northern Goshawks can be found year-round in most of Nevada, although along the western border they may only be present during the winter. But you likely won’t have an easy time finding one, since they prefer to nest in old-growth forest with dense canopy. They have been known to attack humans who get too close to their nests. So when searching for these raptors during the breeding season, be careful.

You can find this hawk year-round in Nevada. You’re likely to see them over marshes, fields, and other wide-open areas.

Red-tailed hawks are the most common hawk found on the North American continent, living year-round in almost every state including Nevada.

Rough-legged hawks can be seen in Nevada during the fall and winter months. When it’s time to move to their breeding grounds, they travel all the way to the northern Arctic! There, they will nest on cliffs and rocky outcroppings.

Sharp-shinned hawks are the smallest hawk in the United States, and can be found throughout Nevada all year. These hawks prey on small birds and rodents they chase through the forest.

Swainson’s Hawks can be found across Nevada during breeding season. You are likely to find them during the summer, over large areas of open country. They’ll perch on telephone poles, wires, and secluded trees.

The zone-tailed hawk only comes to the U.S. southwest during the spring and summer months. They mainly spend their time in Arizona and New Mexico, but some spill over into the southern tip of Nevada. They like rocky canyons and cliffs, as well as hunting in desert scrub and along rivers. Aside from small mammals and reptiles, they are known to eat many types of birds including quail, woodpeckers, jays, nightjars, and members of the thrush family like bluebirds and robins.

The way they arch their wings while soaring and tip from side to side, plus their coloring, often makes them resemble a turkey vulture from afar. Upon closer inspection you can see the large white band on the tail, and barring on their white wing feathers with a dark trailing edge.

Harris’s hawk is quite rare in Nevada, however they are sometimes spotted at the far southern tip of the state. There is a year-round population in neighboring Arizona and southern California, so sometimes they will cross the southern border into Nevada.

These large hawks have dark bodies with rusty red shoulders. There is bright white at the base of their tail as well as the tips, with a dark band in-between. These are hawks of desert lowlands, feeding on ground squirrels, rodents, rabbits, reptiles and birds. They can be social birds, hunting in cooperative groups or even nesting in social units of up to seven adults.

They aren’t as common in Nevada as other states, but you can see them throughout the state during spring and fall migration. A population of them also sticks around to breed near Lake Tahoe and the areas around Carson City. Find them near any shallow, fish-laden waters such as lakes, rivers, reservoirs and marshes.