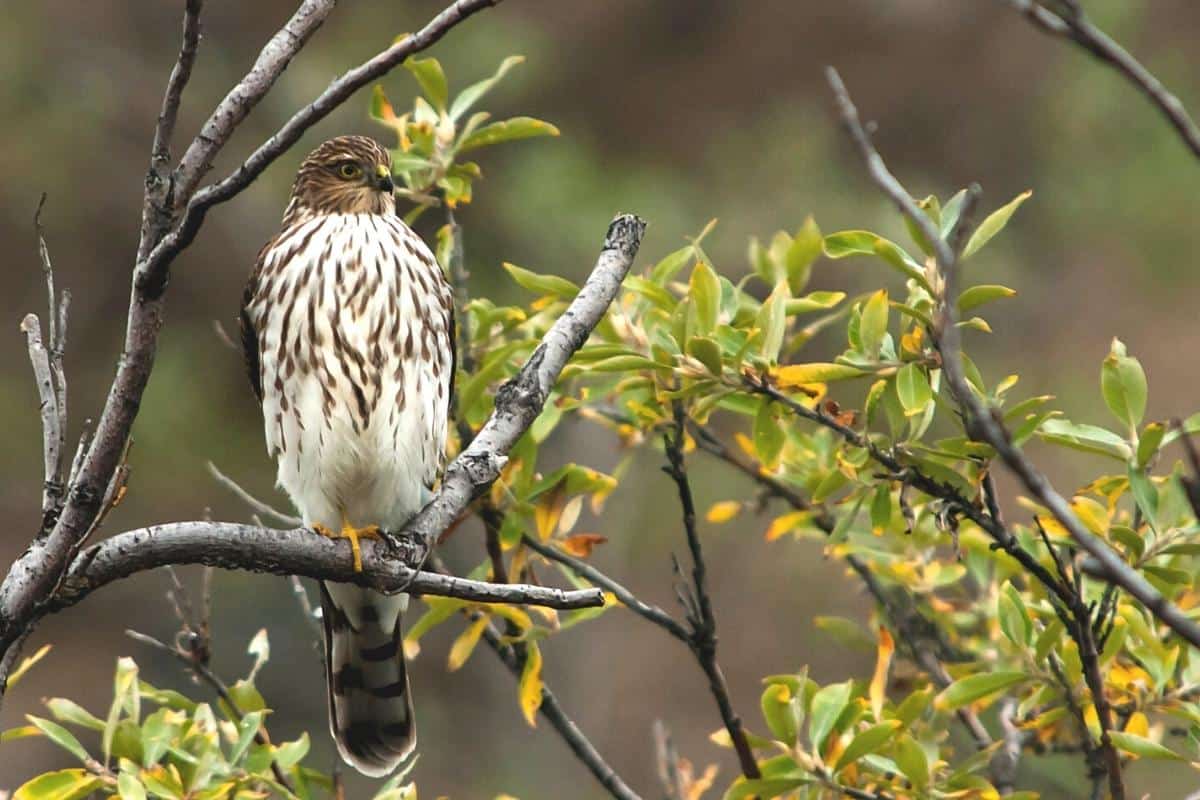 Hawks are quite impressive predators. Everything from their keen hearing and eye sight to their sharp beak and talons comes together to make them expert birds of prey. Throughout history humans, using training and falconry, have benefitted from hawks hunting prowess. There are approximately 16 species of hawks living across the United States. But in this article, we’re going to discuss the 8 species of hawks in New Hampshire.

The 8 species of hawks that can be found in New Hampshire are the broad-winged hawk, Coopers hawk, northern goshawk, northern harrier, red-tailed hawk, red-shouldered hawk, rough-legged hawk, and sharp-shinned hawk.

Broad-winged hawks are migratory, and only travel north into New Hampshire during the spring-summer breeding season. These smaller hawks have a brown head and chest, barred underparts and black and white bands on their tail. In flight you can note their short tail and broad wings with pointed tips.

Cooper’s hawks can be found across most of North America, including New Hampshire. Here, they are mainly present during the spring and summer breeding season. Adults have a bluish-gray back, heavy orange barring on the chest, a red eye, and squared-off head with black cap. Immature birds have a yellow eye, brown back and head, and white underparts with heavy brown streaks.

Northern goshawks can be found in New Hampshire year-round, and have been spotted throughout the state. But you still will have to put in a little effort to find one, since they prefer to nest in old-growth forest with dense canopy. They have been known to attack humans who get too close to their nests. So when searching for these raptors during the breeding season, be careful.

You can find this hawk in New Hampshire mainly during the breeding season and in some parts year-round. You’re likely to see them over marshes, fields, and other wide-open areas, although they are spotted less often than other species on this list.

Red-tailed hawks are the most common hawk found on the North American continent, living year-round in almost every state. These hawks breed in the northern U.S. and throughout Canada, including most of northern and central New Hampshire. Many of these breeding adults may move further south in winter, but a population do stay in the state year-round.

Red-shouldered hawks are common in their range, which is the eastern U.S. and the western coast of California. In New Hampshire they come to breed through the spring and summer, then tend to head further south during the winter months. Some do remain in the southern part of the state year-round.

Rough-legged hawks can be seen in New Hampshire during the fall and winter months. When it’s time to move to their breeding grounds, they travel all the way to the northern Arctic! There, they will nest on cliffs and rocky outcroppings.

Sharp-shinned hawks are the smallest hawk in the United States, and they remain in New Hampshire year-round. These hawks prey on small birds and rodents they chase through the forest.

While nesting, they are hard to find as they stick to forests with dense canopies. Their breeding range begins in far northern New Hampshire and extends up through Canada. They do sometimes visit backyards to hunt birds at feeders. The best time to spot them though is during fall migration. They travel south into the U.S. from their summer range in Canada, and are seen in large numbers at hawk watch sites.