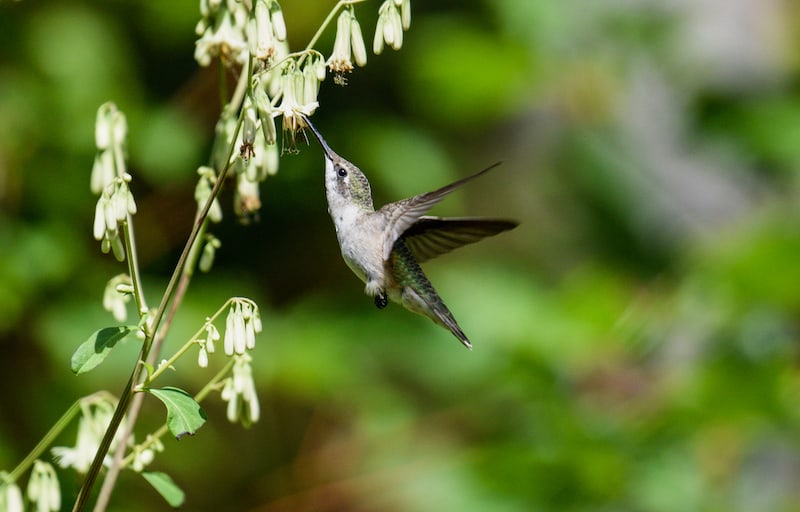 Birdwatching for hummingbirds can be pretty tricky on the eastern coast of the United States. The Ruby-throated Hummingbird is the only species that breeds in this region. However, the year-round warm weather in Florida and it’s relatively close proximity to the southern portion of Mexico and the Caribbean islands makes it possible for rare visits from a variety of hummingbird species. In this article we go over 11 species of hummingbirds in Florida, including the regular occupants as well as the rare and occasional visitors.

Are there hummingbirds in Florida?

Yes, and although there are only two species of hummingbirds regularly found in Florida, it’s still more than most states on the east coast get!

11 different species of hummingbirds in Florida

Ruby-throated Hummingbirds are the only hummingbirds that breed in the eastern half of the United States before migrating south to Central America in the winter. They’re commonly found throughout Florida during the spring and summer, and some are even found at the southern tip of the peninsula during the winter.

Ruby-throated Hummingbirds are often spotted in open woodlands and meadows. They’re also found in suburbs, where they’re very likely to visit backyard feeders and gardens. Though they’ll sip nectar from a variety of flowers, they seem to favor red and orange flowers the most. For a more detailed list of what flowers and plants attract hummingbirds to your yard, check out this other article.

To feed on nectar, they use their rapidly beating wings to hover in front of a feeder or flower. They then use their long bills help them reach far inside the flower to suck up nectar. During this process they may also help pollinate as well. Though Ruby-throated Hummingbirds rely on flower nectar as their primary food source, they’ll also eat insects on occasion.

These hummingbirds are primarily emerald-green on their upperparts with white underparts and bellies. Males have a throat patch that is an iridescent red when the light hits it. They have short wings that don’t reach past their tails when perched, and their legs are so short that they are only used to perch and shuffle along, rather than walk or hop.

Rufous Hummingbirds are small hummingbirds with short wings that don’t extend past their tails when perched. Their bills are thin and straight. Male Rufous Hummingbirds have coppery-orange plumage that nearly covers their entire bodies. Their bellies are cream-colored and nearly white towards their chest, and they have green patches on their backs and wings. Females have some orange coloration on their sides and tails.

These hummingbirds are also known to be pretty vicious, despite their small size. They will aggressively defend flowers, feeders, and territories — readily attacking intruders that would get in the way, even if they’re much larger.

Rare and occasional hummingbirds in Florida

Like their name implies, Bahama Woodstars are found in the Bahama archipelago, where they are endemic. These islands include the Bahamas and Turks and Caicos. Since these islands are close to the peninsula of Florida, it’s no wonder that they’ve been spotted in the state multiple times, even though they don’t live here regularly.

These little hummingbirds look similar to Ruby-throated Hummingbirds, but males have purple coloration on their throats and foreheads rather than red. Their tails are also long and forked at the end. Females have orange sides. Bahama Woodstars are common visitors to gardens and feeders and they also inhabit wooded habitats and scrubby areas.

Like Bahama Woodstars, male Black-chinned Hummingbirds also have purple coloration on their throats, though their patches are much smaller. The upper portion of their throats are black, as their name implies. The rest of their plumage is green with underparts that are grayish-white. Though their range is primarily the western half of the country, some Black-chinned Hummingbirds have been spotted in Florida.

Though they’re found plentifully along the western coast of the United States, it’s pretty rare to spot an Anna’s Hummingbird in Florida — though it has happened in the northwestern corner of the state. They typically occupy open areas and woodlands with clearings. They also inhabit desert scrubs and are likely visitors to feeders and gardens.

These hummingbirds are mostly green, but males have small, iridescent, pink patches near the sides of their throats. They’re medium-sized hummingbirds, with broad tails and stocky bodies. Their wings are short and don’t reach past their tails when perched, and their bills are also smaller than other hummingbirds. Males also tend to be pretty vocal, and have a buzzy, metallic sounding call.

Allen’s Hummingbirds look incredibly similar to Rufous Hummingbirds, except that male’s have a green back. However, Rufous Hummingbirds also sometimes have this feature as well, making it very hard to tell the two birds apart. Both males and females sport orange throat patches that are iridescent in the sunlight.

Allen’s Hummingbirds also have a narrower range than Rufous Hummingbirds. They breed only along the western coast of California and are more rarely spotted in Florida. In California, they’re commonly found in shrubby areas, somewhat open habitats, and coastal gardens.

Costa’s Hummingbirds are typically found in the deserts of the southwestern United States and western Mexico. During the summer they migrate to the coastal areas of California to avoid the extreme heat. However, like many of the hummingbirds on this list, rare occurrences of Costa’s Hummingbirds have been spotted in Florida.

These hummingbirds are small, even for hummingbirds, with short tails and slightly downcurved bills. They have green coloration overall and males have royal purple foreheads and throats. Males also have a distinct, high-pitched whistle thats frequently heard in early spring. Female plumage is duller, with off-white underparts and no purple accents.

These are the tiniest hummingbirds, and birds in general, found in North America. They’re only 3 inches long and weigh a mere one-tenth of an ounce. Both their tails and their bills are short compared to other hummingbirds. Females are pretty dingy in color overall, but males have throats streaked with a beautiful, iridescent magenta.

Though very rare, there have been findings of Broad-tailed hummingbirds in the very northwestern corner of Florida. Their normal range is the mountainous western portion of the United States during the breeding season, and in the winter they migrate to southern Mexico.

Male Broad-tailed Hummingbirds have emerald green plumage on their upperparts, white chests, and a red throat patch. Like most other hummingbird species, females lack the throat patch and are dull in color. Males also have a distinct, metallic trill that’s often heard before the bird itself is even spotted. However, large groups of Broad-tailed hummingbirds often gather at mountain meadows full of flowers, making them easier to spot.

Male Broad-billed Hummingbirds are covered in vibrant, blue-green plumage that’s iridescent in the right light. Most of their bills are bright red, and dark at the tip. They’re common hummingbirds, but are predominately found in Mexico and in limited areas of the United States. However, they’ve been spotted in a few areas on the western side of Florida’s peninsula.

Buff-bellied Hummingbirds are medium sized hummingbirds. Though their name implies they have noticeable pale bellies, in actuality it can be hard to see. If anything their green plumage and red bills are easier to spot.

Buff-bellied Hummingbirds are primarily found in eastern Mexico, where they’re common. They have a limited range in the United States, but have been seen on the eastern coast of Texas, and the southern coasts of Louisiana and Alabama — as well as in the northwestern corner of Florida. They prefer wooded and shrubby habitats, but will also visit feeders.

Ruby-throated Hummingbirds are the only hummingbirds that breed in eastern America. In the spring they begin their impressive migration north for breeding season, with males generally leaving a little earlier than females. During the winter, these hummingbirds reside in Central America in places such as Mexico, Costa Rica, and Panama — though some over-wintering populations are found in the very southern tip of Florida, too.

Rufous Hummingbirds migrate northwest in early spring and begin to travel southeast in late June. Like Ruby-throated Hummingbirds, males tend to leave earlier than females to stake out territory. These hummingbirds are known to wander very far east out of their range and now many of them end up staying in states along the Gulf Coast during winter.

How to make hummingbird nectar

Making your own hummingbird nectar is a very simple process and only requires two ingredients; sugar, and water.

Check out this article for even more information about making your own hummingbird nectar.