Who doesn’t love owls? They are really the most curious and fascinating of all birds to me. I find everything about them so interesting. In this article we’ll take a look at the owls in Florida including some pictures and facts to help you identify them if you see one.

When it comes to owls in Florida, you will find 7 species in the state. The Barn Owl, Eastern Screech-owl, Great Horned Owl, Burrowing Owl, Short-eared Owl, the Northern Saw-whet Owl, and the Barred Owl. Here’s a little info and a picture of each one. Up first is the Barn Owl.

7 Species of Owls in Florida

The Barn Owl can be found throughout Florida and most of North America all year round pretty much everywhere including woodland areas, farms, suburbs, and clearings. These nocturnal birds of prey can easily be identified by their ghostly white faces and heart-shaped faces.  Even though they are widely distributed, their populations are declining in some areas due to loss of habitat. Learn more about the Barn Owl here.

The Eastern Screech-owl can be found all throughout Florida and the entire eastern half of the United States. As you may have guessed, they are named for their screeching call. These loud, sharp barking calls indicate alarm or agitation and are typically made by adults defending nests or fledglings.

Great Horned Owls can be found all throughout North America from Alaska to the southern tip of Florida year-round. Learn more about the Great Horned Owl here.

The Burrowing Owl can be found year-round throughout most of Florida, and have even been spotted as far south as Key West. Less frequently seen in the far northern part of the state and panhandle.

Burrowing Owls are the only birds of prey that nest exclusively in the ground, in burrows usually made by other ground dwelling animals like prairie dogs or ground squirrels.  Here are some more interesting facts about Burrowing Owls. 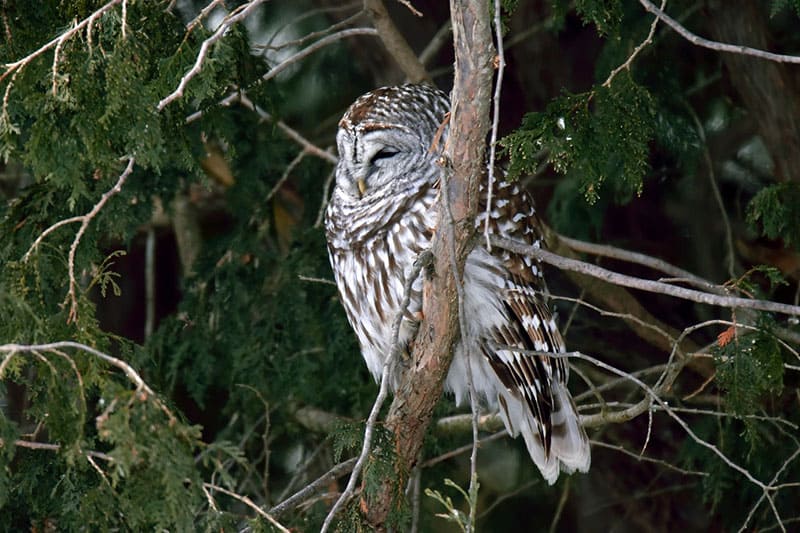 The Barred Owl’s distribution includes all of the state of Florida and most of the eastern half of the United States as well parts of Canada in North America. Being that they are nocturnal, they are more active at night and prefer living in large, mature forests. They are also known for using nest boxes that are offered.

The Short-eared Owl prefers open ground for hunting, and as well as fields and marshes, can be found at airports. They have a winter range throughout the state of Florida, but are elusive and rarely seen.

The female Northern Saw-whet Owl keeps a very tidy nest. She leaves her chicks after they are about 18 days old and the male continues to feed them until they leave the nest about 10 days later. In typical youthful fashion, the young owls do not clean up after themselves, and by the time they leave home the nest is coated in rotting prey, pellets, and fecal matter.

They’re found northern Florida, but only rarely and in the winter. Northern Saw-whet Owls are the smallest owls in Florida and the U.S. Coupled with their small stature, they can be identified by their big round heads with big eyes. In addition to their tiny size, there are a few other reasons why these owls are notoriously difficult to locate.