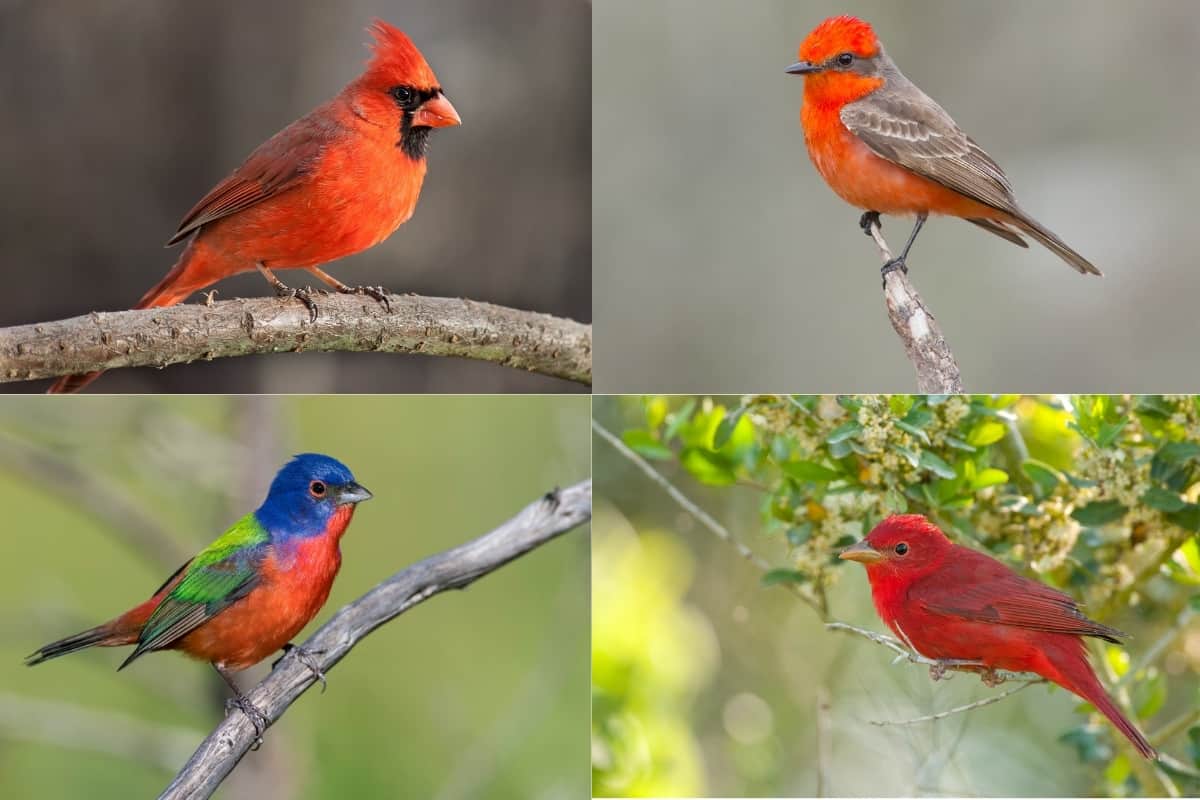 The great state of Texas has a variety of environmental conditions and habitat within its borders. From the mesas and scrub of West Texas to the rolling green fields of East Texas, many different environments for birds abound. Many species of red birds live and migrate throughout Texas. This article takes a look at the habitat, diet, and behavior of eight red birds in Texas. If you want to find out how to attract these bright, cheerful birds to your backyard, read on!

The ubiquitous red bird of most of the East and Southwest, the Northern Cardinal makes itself at home throughout the state of Texas. It loves to nest and hide in dense thickets, which abound in the open woodlands of the state. Males are the ones with the bright red coloring, while females are a tawny brown.

Spot males in the spring and summer singing from exposed perches. They’re easy to spot visually in the winter because their red feathers stand out against dead foliage.

Attract Northern Cardinals to your feeder with almost any type of birdseed. These songbirds are finches, so seeds are their favorite type of meal, especially sunflower.

It’s hard to miss a Summer Tanager in a Texas forest! Its bright red feathers contrast beautifully with the green leaves of trees and bushes. Only the males are strawberry-colored. Females are dark yellow and harder to spot in underbrush.

Summer Tanagers live throughout the state, except for the panhandle. As their name suggests, you’ll only find them during the summer months as they leave for warmer climates further south in the winter. Look for them in tall trees. They’ll often perch at the top, where they have a clear view of the environment around them.

You’re unlikely to attract a Summer Tanager to your yard with seeds. These insectivores prefer to chase after bees, which they catch in the hundreds. They will eat berries, however, so planting some in your yard is a good idea.

Even though the Scarlet Tanager is just a temporary visitor to the state of Texas, it’s on this list because of its bright red feathers and tendency to pass through the eastern half of the state during its migration.

You may be lucky enough to see a slightly-scarlet Scarlet Tanager in the beginning of migration season – either in the spring or fall. Look for them in forests with thriving berry plants.

Texas has the good fortune to harbor three kinds of habitat for the Vermilion Flycatcher – breeding, year-round, and nonbreeding. West Texas only sees these birds during the spring and summer. Coastal Texas hosts them in the winter. The area in between is lucky enough to have Vermilion Flycatchers year-round.

Only males are scarlet; they have a black mask over their eyes, much like a bandit, and a red head and belly. Females are nondescript, but their blush-colored belly and delicate face is just as endearing.

Vermilion Flycatchers exclusively eat insects so you can’t attract them to your yard with seeds. But if you have a water feature, they may hang out near it to prey upon insects.

This ubiquitous visitor to feeders throughout most of the United States is a year-round inhabitant of western and central Texas. They adapt well to human development and are commonly seen in city parks and suburban yards. Males and females are light brown with dark brown streaks, but only males have a red wash on their heads, upper back and belly.

Males get their dusky red coloring from the antioxidant content of the foods they eat. What food makes them red? Berries! In some cases, females have been known to pick males who have redder feathers.

You can encourage House Finches to descend upon your feeders by offering black oil sunflower seeds. These finches often travel in groups, so if there’s one finch today, there will probably be twenty more tomorrow!

Equipped with a hardy beak and dexterous tongue, the Red-bellied Woodpecker can extract insects from even the densest tree bark. They are pretty easy to identify with their heavily black and white speckled wings and bright red stripe across the top of their head. They also have red on their lower belly, although it is often hard to see.

Red-bellied Woodpeckers are native to the forests and open woodlands of East Texas. They make their homes in dead trees and snags, preferring to nest in enclosed cavities instead open-air nests.

Your best bet to bring them to your backyard is by offering suet in the winter. This supplements their diet and supports vulnerable populations.

A close relative of the Northern Cardinal, the Pyrrhuloxia has a similar body shape and crest as its cousin. Its short, powerful beak is reminiscent of that of a parrot. The Pyrrhuloxia’s color is more muted, however, with a mixture of gray and dark red.

Look for a Pyrrhuloxia in the scrubby dry landscape of western Texas. Bold and daring, they can withstand both intense summer heat and strong winter winds. Males and females have the same coloring and can be found during the winter in flocks of up to a thousand.

These gregarious birds eat insects along with seeds and berries. Entice them to a bird feeder by offering sunflower seeds. They forage on the ground in the wild, so scattering seeds on your lawn or patio may attract them more than offering food in a feeder. 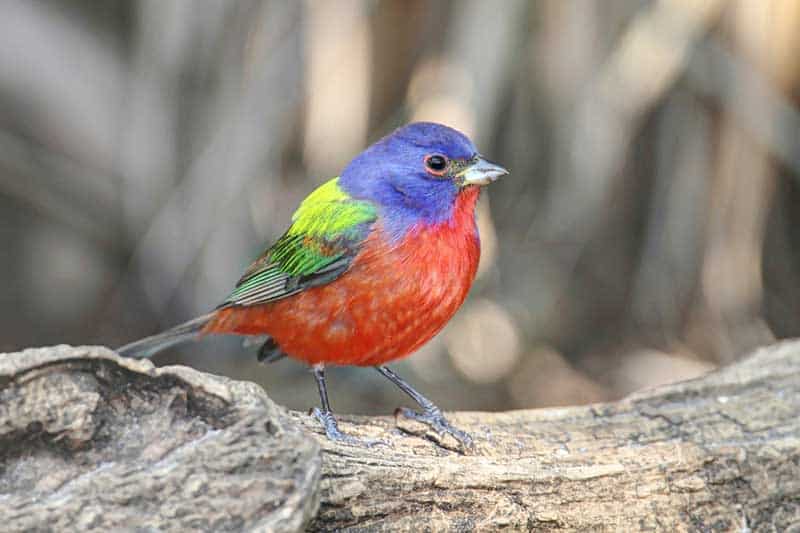 The Painted Bunting is a visual feast. From technicolor indigo to lime green to bright scarlet, this small songbird is almost magical to see in the Texas hill country. Spot one everywhere in Texas except for the extreme west.

Since they love thickets and dense foliage, Texas landscapes are home to many. They only spend spring and summer in the United States. In the fall, they migrate south to Central America, where they pass the winter months.

Attract them to your yard at the end of summer when they’ll be eager to eat seeds in preparation for their long journey south.

If you’re interested in Texas birds, here are some other articles you may enjoy: