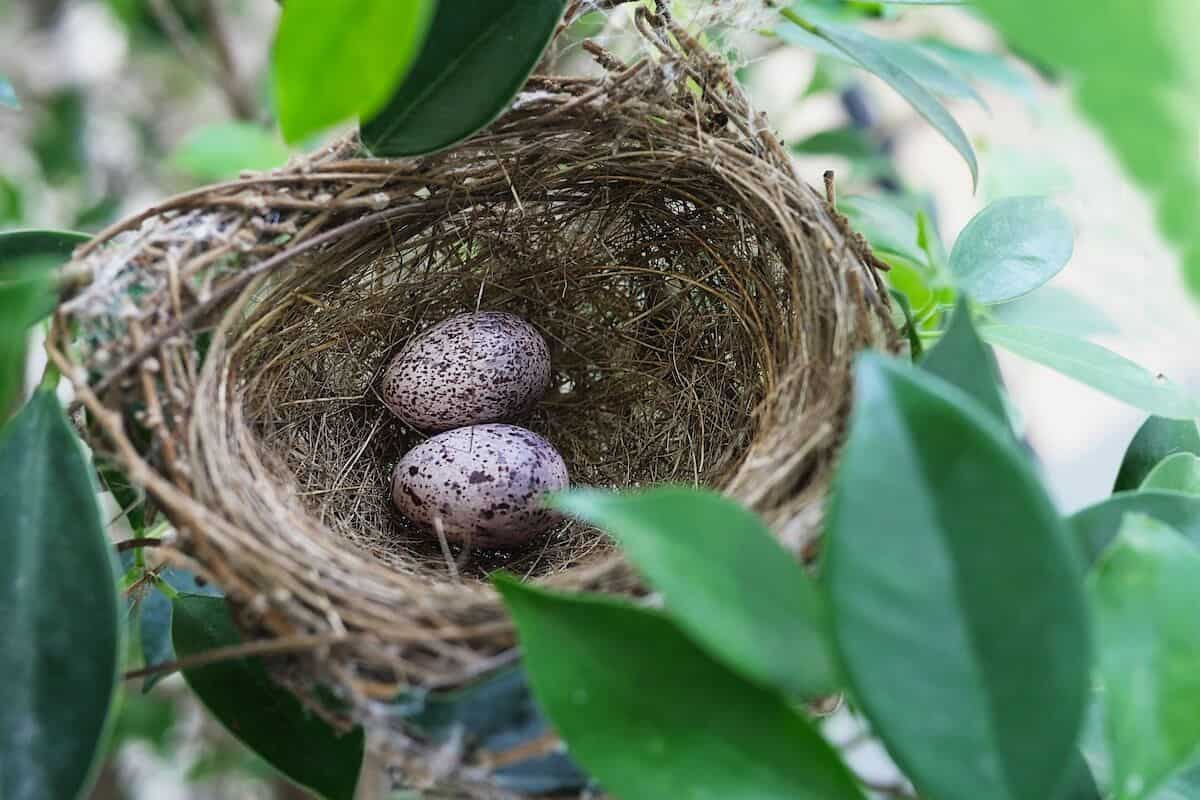 Bird eggs come in a variety of colors, including blue, gray, brown, and white. Most of us are probably familiar with the white or brown chicken eggs at the store, or the bright blue eggs of a robin. But eggs can also be speckled. The full reason for why some eggs have speckles and some don’t is unknown, although there are some theories. In this article we will learn about 20 birds with speckled eggs.

So why do birds have speckled eggs? The simplest explanation would be that speckling helps the eggs blend into the nest better, providing camouflage. This may be the case for some species (especially ground nesting birds), but certainly not for all of them. Many mothers keep their eggs fairly well hidden with no need for camouflage, and in some species the speckled eggs actually stand out against the nest background rather than blend in.

There is still a lot to be discovered about these spots and their uses among different bird species. But for now, let’s just take a look at 20 common species known to have speckled eggs. 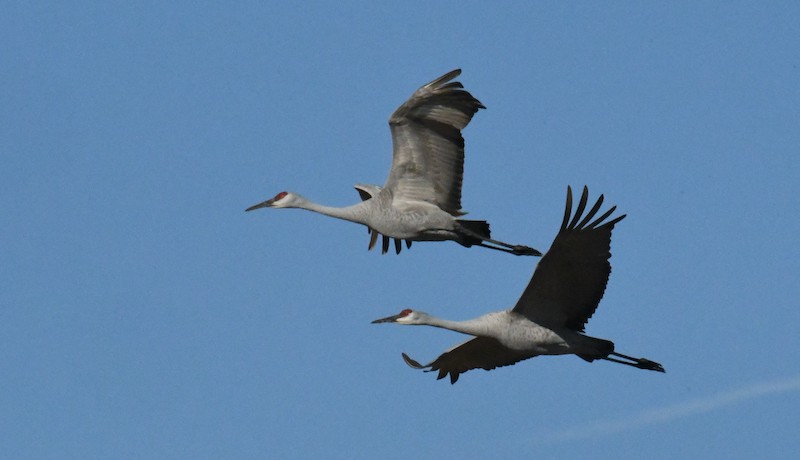 The Sandhill Crane is an elegant and beautiful bird which lives in many regions of North America, as well as part of Mexico and the northern Caribbean islands. It spends the spring and summer in most of Canada as well as the United States’ northern prairies. Wintering populations live in Florida and Texas.

Sandhill crane eggs are light brownish-yellow with brown or gray speckles. They lay about 1-3 at a time, and they incubate for 29-32 days.

The Vermilion flycatcher is a bird of the wide open spaces of Mexico and the American Southwest. The male has a brilliant scarlet breast and belly, and the female’s dusky peach color is also striking. They love to eat insects and can be spotted on perches where they have a good view of prey.

Vermilion flycatcher eggs are white with dark brown speckles. They lay 2-4 at a time, and incubate for 13-15 days. Nests are often along streams and made of a cup of twigs bound with webs and lichen.

A perennial favorite throughout much of the eastern United States, the northern cardinal is a reliable and easy to spot songster. He readily visits bird feeders and sings and whistles often from high, visible perches. Females nest in thick tangles of brush and foliage.

Northern cardinal eggs are grayish or greenish white with gray or brown spots. They lay 2-5 eggs per clutch, and it takes 11-13 days for incubation.

Listen for cedar waxwings’ delicate whistle throughout most of the United States. Populations winter in the lower states, summer in southern Canada, and spend the entire year in the northern United States. They love fruit and will visit yards with fruiting trees, bushes, or vines.

Eggs of the cedar waxwing are pale blue or gray with black or gray spots. They can lay up to 6 eggs at a time, and incubation is 11-13 days. They like to weave cattail down, string, horsehair and other soft materials into the nest cup made of twigs and grasses.

This black and white bird is one of the most recognizable songbirds in the United States and Mexico. Native to the entire lower 48, the northern mockingbird spends its time loudly repeating the songs of other birds. It is territorial and often flicks its tail up and down and flashes its white wing bars.

Mockingbird eggs are a pale blue or green with reddish or brown speckles. They lay 2-6 eggs at a time and incubation is about 12-13 days. Males construct the nest cup, while females add the inner lining.

You’re more likely to hear the cry of a territorial killdeer before seeing this small, leggy shorebird. Its call is what gives it its name – kill-deer, kill-deer – and is usually made by a parent protecting its young. They live throughout the United States and Mexico, and summer north into Canada.

Killdeer are ground nesters, laying eggs in a small depression right on the ground. Eggs are buffy colored and heavily speckled with brown spots. They lay 4-6 eggs and incubate for 22-28 days.

Brown-headed cowbirds are often thought of as a nuisance throughout most of their range. This is because they are nest parasites. Females don’t construct a nest, lay eggs, and raise their young in it. Instead, they lay their eggs in other birds’ nests. Brown-headed cowbird chicks mature quickly and push the other chicks out of the nest.

Cowbird eggs are white or grayish-white with brown or gray spots. They often deposit just one egg in another nest. They incubate in only 10-12 days, which is slightly faster than many songbirds.

Herring gulls go beyond coastal areas to live in many inland areas of the United States during the winter. Although one population lives in New England year-round, many others spend the warmer months in Canada, then migrate south to the Pacific Coast and Gulf coast. They are the typical aggressive, eats-anything gull.

Their eggs can range from tan to pale greenish, with dark speckles. They lay 1-3 eggs, and incubation takes a full month at 31-32 days.

Black-capped chickadees are small birds with big personalities. They are curious and very apt to come to bird feeders. While their main source of nutrition is insects, they love suet, peanuts, and sunflower seeds. They live year-round in the northern United States, Southern Canada, and north into even southern Alaska!

Their eggs are white with small reddish-brown spots. Adults can lay up to a whopping 13 eggs, and incubation is 12-13 days. Chickadees are cavity nesters, and look for openings in dead snags and branches.

Yellow warblers are spring and summer inhabitants of North America. When the weather turns cold, they migrate to South America in the winter. While in the United States, this bright yellow warbler makes itself at home in wooded groves, streamside bushes, and rural areas.

Yellow warblers have grayish or greenish eggs with dark speckles. They lay 1-7 eggs per clutch that incubate in 10-13 days. 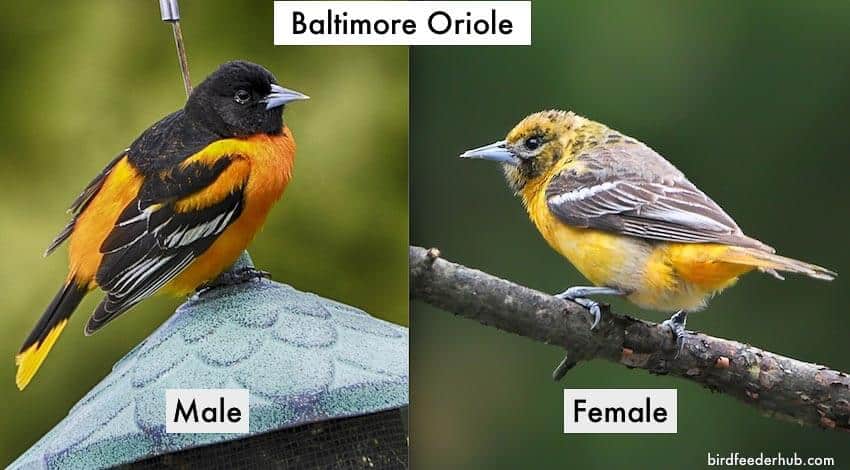 The Baltimore oriole can be spotted in Maryland as well as most of the Eastern United States. This songbird is a fruit-eater which loves dark and ripe fruit. Attract it to your backyard by offering dark cherries, plums, and fruit jelly. Males are hard to miss since they have bright orange chest feathers!

Orioles build sock-like, hanging nests. Their eggs are pale gray or blue with blotchy dark spots. They lay 3-7 eggs per clutch and incubate for 11-14 days.

Fish-eating ospreys live in and migrate between the northern and southern coasts of North and Central America. Populations winter along the coast of Mexico, Texas, and Southern California, and spend warm months in the Rockies, the American South, and Canada. Some live year-round in the Southeast.

Osprey nests are made of sticks and lined with bark, place atop trees, cliffs or on man-made platforms. They lay 1-4 eggs that are cream or pinkish brown, with reddish brown spots. Eggs incubate for 36-42 days.

House sparrows have adapted very well to human development; they nest almost exclusively in the walls and eaves of buildings. They were introduced to North America from Europe in the 1800s, but they’ve adapted to conditions and live there year-round. They’re probably already visiting your bird feeders, and they like sunflower seeds and millet.

House sparrows can lay 1-8 eggs at a time. They are pale greenish or bluish white, with gray or brown speckles. It takes about 10-14 days for them to hatch. 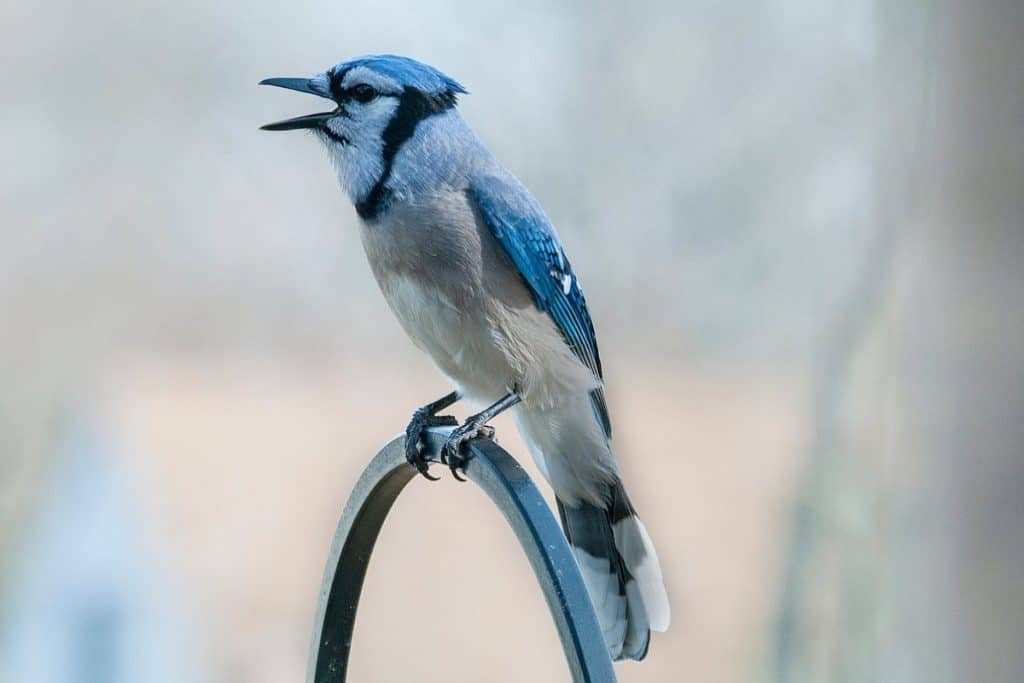 The squawking call of the Blue Jay is impossible to miss. This territorial songbird rules its roost by a combination of intelligence, cooperation with other birds, and sheer intimidation. They can be spotted throughout the United States west until the Rockies. While they’re unlikely to visit a hanging bird feeder, they can be attracted to a backyard with oak trees and birdbaths.

Blue jay eggs are a light bluish or brownish color, with pale brown spots. Their clutch contains 2-7 eggs, and incubation is 17-18 days.

Peregrine falcons are swift, strong raptors which have made a remarkable comeback after nearly dying off due to DDT poisoning. Most populations live along the East and West coasts of North America. Some populations migrate between the Gulf coast in the winter and the northern reaches of Canada in the summer. They have adapted well to human construction projects, especially skyscrapers.

Peregrin falcons nest on cliff, about a third of the way down the cliff face on a ledge. They may also use other tall structures like bridges, skyscrapers and silos. Eggs are cream to brown colored, with purplish, reddish brown splotches. 2-5 eggs are laid at a time, and incubation takes 29-32 days.

The migratory hooded warbler flies between the Southeastern United States and Central America. While in the U.S., it prefers to live in the lower levels of forests, where it searches for insects on branches and leaves. Males’ black hood stands out brightly against their bright yellow plumage. They don’t visit feeders, so look for them on a hike or a walk through older forests.

Females can take up to 6 days to finish their nest, working precisely on construction to make it resemble a clump of dead leaves. Their eggs are cream colored with brown speckles. They lay 2-5 eggs at a time, and incubate them for 12 days.

The Atlantic puffin lives exclusively on the coast of Eastern Canada and Northern New England. They double as fliers and adept swimmers who catch fish on the wing while underwater. While they spend most of the year at sea, flying and swimming and hunting on cold waters, they breed in the summer on islands off the coast of the North Atlantic.

These puffins dig a shallow hole or burrow in the ground to use as their nest. They may also nest under boulders or in rock crevices. Their eggs can be plain white or speckled. Atlantic puffins typically only lay one egg at a time, and must incubate it for 36-45 days.

It’s easy to spot this intelligent bird; its unmistakable glossy black plumage and raspy croak give it away. Crows have adapted to a range of environments across North America, living year round in most of the lower 48 states. Crows are some of the smartest species of birds, having a sophisticated social network, and have been known to use tools to obtain food and water.

Crow eggs are a pale bluish green with brown speckles that get heavier at the large end. They lay 3-9 at a time, and they incubate for 16-18 days.

The Pyrrhuloxia is the northern cardinal’s southwestern cousin. This seed-eating, scrub-dwelling songbird shares a silhouette with its relative; both have a crest and a strong beak made for crushing hard seeds. Look for them in Western Texas, southern Arizona and southern New Mexico. They’ll visit backyards with scattered seeds, especially sunflower seeds.

Pyrrhuloxia eggs are very similar looking to cardinal eggs, a grayish-greenish white with pale splotches. They lay 2-4 eggs at a time that are incubated for 14 days. 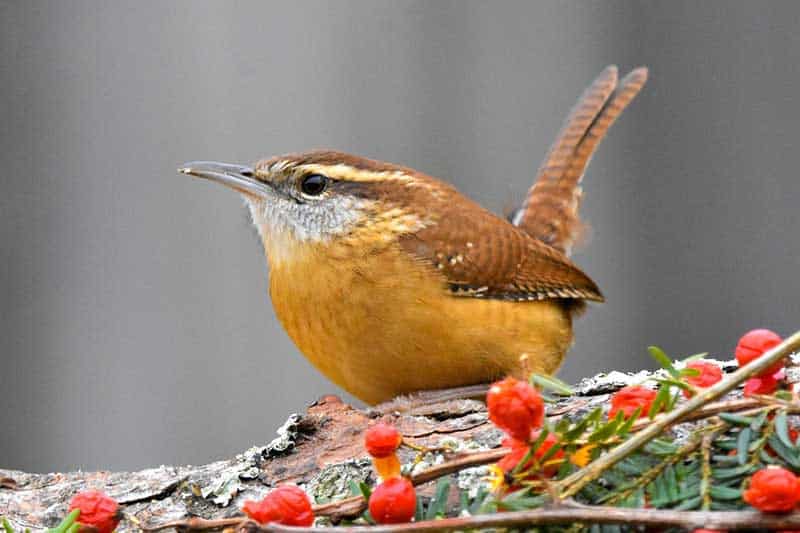 Carolina wrens make themselves known by their loud call of ‘teakettle-teakettle!’ Because of their brown and cream plumage, they blend well into the dapples of light and shadows in forest environments. While their main diet is insects, they will visit suet feeders. If the weather is especially cold, many will pile into nest boxes to keep warm.

Carolina wrens nest in tree cavities, or sometimes on the ground. They are known to use any cavity found around the outside of your house, including insides shoes and flowerpots. These wrens lay 3-7 eggs at a time that are cream or pinkish colored with fine rusty speckles. Their incubation period is 12-16 days.