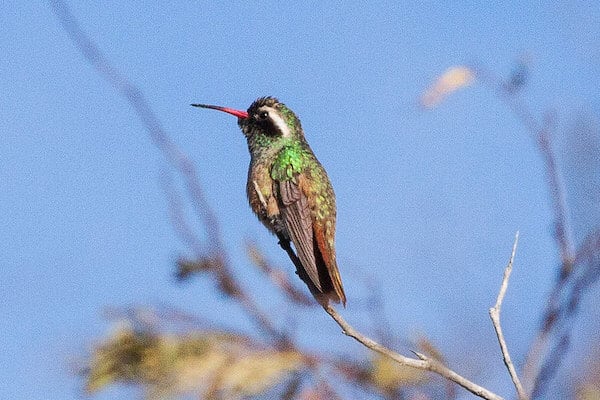 In the English alphabet, there are relatively few words that begin with X. Names of birds that start with X are similarly uncommon. In fact, we could only find four currently living species who’s common name begins with an X. Interestingly, they are each found on a different continent. One in North America, one in South America, one in Africa, and one in Asia.

4 Birds that start with X

Males have a gray head and body, and a black back and tail marked with rows of white spots. Females have a lighter throat and instead of the dark back with spots, they have a plain brown back and tail. These antbirds like to hang out in pairs in the forest understory. Despite their name, they don’t exclusively eat ants. What their diet is isn’t very well studied but it is believed to be mostly insects.

Fun fact: Xingu’s will often show up at ant swarms to eat the insects that are trying to escape the ants.

Xavier’s Greenbul is only known to live in parts of central Africa such as Cameroon, Equatorial Guinea and Uganda. They have an olive-brownish back with a yellow chest and belly. These greenbul’s mainly eat beetles, spiders, caterpillars and moths and supplement with fruit and seeds. They live in tropical or subtropical dry forests or moist lowland forests.

Fun fact: In their small range they often live in protected habitat within parks such as Korup National Park and Cameroon  and Semliki National Park in Uganda.

Click here to see photos of Xavier’s Greenbul on eBird.

Xantu’s aren’t brightly colored, with green backs and throats, a reddish-brown tail and buffy belly. Their most defining feature might be their bright white eye stripe. Their only breeding habitat is the Baja Peninsula of Mexico, however they are sometimes vagrants along the Pacific coast of the U.S. and British Columbia.

Fun fact: The black-tipped red bill of the Xantu’s is curved slightly downward, unlike the straight bill of the closely related white-eared hummingbird.

The Xinjiang ground-jay, like other jays and crows, is a member of the bird family Corvidae. With the long and slender body shape of most jays, the Xingjiang ground-jay has a mostly tan body, black wings with large white patches, a black cap, black legs, and a black slightly downturned bill.  Their preferred habitat is dry open areas and scrubland. Unfortunately due to habitat degradation and fragmentation, they have been on the list of “near threatened” species since 2004.

Fun fact: Xinjiang ground-jays are known to be fairly quick runners, able to chase down and catch small invertebrates and reptiles.

Click here to see photos of the Xinjiang Ground-Jay on eBird.