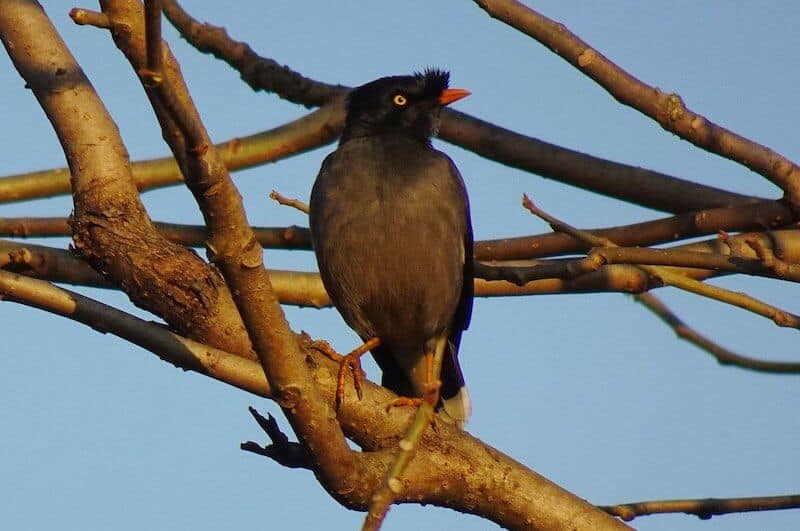 The birds that start with J on this list come from all over the world. Some of the birds are native to South and North America, while others can be found in Japan, Indonesia, and Asia. These birds were chosen for their exquisite colors, behavior, habitat, and feeding habits.

Birds That Start With J

Below is a list of 16 interesting and varied bird species whose name starts with J. Let’s take a look!

You will hear these birds from early in the morning up to midday singing their “peter-peter” song.  Jacky winter’s are small grey-brown flycatchers. There are three subspecies with slight color variations, being generally darker in the south and paler in the north. The Jacky winter is an insectivore, which means that it mainly feeds on insects. It is known as a sit-and-search predator, flying out from it’s perch to catch and insect then returning to the same perch.

Fun fact about Jacky winters: Due to their habit of perching on stumps and fence posts they are also sometimes known by the names “stumpbird” and “postboy”.

The Jacobin cuckoo is a brood parasite which means that they rely on others to raise their young. They lay eggs hurriedly by perching over the rim of another birds’ nest. This often results in damaging one or more of the hosts’ eggs. While multiple eggs are laid in the host nest, there are usually only two hatchlings. The host bird will raise the cuckoo babies are their own.

Fun fact about Jacobin cuckoos: These birds are viewed as the harbingers of the monsoon rains because of the timing of their arrival, typically right before monsoon season.

This member of the finch family is very distinctive looking with its thick pink bill. They have a gray body and chest, brownish-pink belly, pink legs, and a black head with white cheek patch and red rimmed eye. Java sparrows are social birds that forage and roost together in flocks. They feed mainly on seeds and grains, which they crack with the ease of their thick beak. In fact, they are considered an agricultural threat in some countries due to their consumption of rice crops.

Fun fact about Java sparrows: while they are not native to Hawaii, once they were introduced they flourished and today they can be found on all of the Hawaiian Islands.

The Jamaican oriole is related to the orioles from the North American mainland such as the orange oriole and the Baltimore oriole. These beautiful birds are yellow with black and white wings and a black face mask. Their habitats are subtropical or tropical and can be found from gardens to forests. As long as there is fruit to be found, which is a large part of their diet along with nectar and insects.

Fun fact about Jamaican orioles: Due to their love of bananas, they are sometimes nicknamed the “Banana Katie”.

The Jambu fruit dove is a small, brightly colored fruit dove that mainly resides in lowland rain forests and mangrove swamps. Males can be identified by their black chin and crimson face. Females, on the other hand, have a darkish chin and pale purple face. These doves will eat fruit from the ground or directly on the tree.

Fun fact about Jambu fruit doves: In the  breeding season, the male will coo while raising its wings and bobbing its body to stake it’s territory. If this display fails, the male may deliver a quick peck to fend off other males.

James’s flamingos appear very similar to other flamingo species. They can best be identified by their paler pink color and the bright yellow patch on their beak. You will be able to spot a small patch of black at their back, these are the flight feathers. Hatchlings are gray or white. Due to their carotene-rich diet, they will attain their pink hue at the age of two or three.

Fun fact about James’s Flamingo: The large joint you can see in their leg is not the knee, but rather the ankle.

Jandaya parakeets have a glorious plumage. Its bill is black and it has a yellow head, orange cheeks, a green body and wings, reddish-orange back and blue tips on the wing and tail feathers. Their natural habitat is palm groves and lowland deciduous woodland. It mainly feeds on things like mangos, palm nuts, and cashew apples.

Fun fact about Jandaya parakeet: There are things that are toxic to this bird species and include caffeine, chocolate, and some of the chemicals found in avocado.

These interesting looking birds have a black head, light breast, brown back and blue eye-ring. Breeding males can become quite dark with a purplish sheen. Japanese paradise flycatchers’ natural habitat and breeding grounds include evergreen broadleaf forest of Japan as well as shady mature deciduous forests. There has been a large decline in breeding numbers due to loss of breeding ground.

Fun fact about Japanese paradise flycatchers: Adult breeding males of the species have extremely long tails that stream out behind them.

You may be able to guess by its shape, but the Jabiru is a member of the stork family. They have a mostly white body, long black neck and head that are featherless, and a red pouch at the base of the neck. The Jabiru is the tallest flying bird found in South America, and males are up to 25% larger than females. You will typically find these birds next to rivers and ponds, in large flocks.

Fun fact about Jabirus: Its name is derived from the Tupi–Guaraní language, a South American language, and its English translation means, “swollen neck”.

A bird of many names, the Japanese white-eye is also known as the warbling white-eye and the mountain white-eye. They are olive-yellow in color with a buffy belly, but perhaps the most obvious identifying feature is their prominent white eye-ring. These birds spend most of their time in the trees, often in flocks. Their diet consists of fruit, insects and nectar.

Fun fact about Japanese white-eyes: These birds were introduced to O’ahu in 1929. The population quickly boomed and is considered one of the most populous land birds in Hawaii. Today they can be found throughout all the Hawaiian islands.

Waxwings have a slender, streamlined shape. Their plumage is primarily a tawny-brown color, with a black mask, gray wings, and a red under the tail. These waxwings actually lack the row of waxy tips on their wings that give the waxwing family their name. They mainly feed on fruits and berries, but also eat insects, especially during the summer.

Fun fact about Japanese waxwings: These birds don’t have a true song but its call is described as a high-pitched trill.

Frogmouth’s get their name from their wide beaks and wide squat head without much of a neck that gives their face a frog-like appearance. Their plumage is a mottled brown and gray that camouflages them quite well.  This species is nocturnal and crepuscular, feeding on insects such as moths, butterflies, beetles, earwigs, and cockroaches.

Fun fact about Javan frogmouths: Their nests are usually built on the lower level branches of a tree and is made from downy feathers, bark fragments, and moss.

Titmice have a small crest (mohawk) that can help you tell them apart from other birds. The juniper titmouse is no exception, and has a small gray crest. Juniper titmice are a uniform silver-gray all over with a black eye and short, slightly thick black bill. They may not be flashy but they like to chatter and it’s easy to hear them in the pinyon-juniper woodlands they live to live in.

Fun fact about the Juniper titmouse: these titmice will hide away a large cache of seeds to get them through the winter months when insects, their main summer diet, are hard to find.

The Javan green-magpie is registered as a critically endangered species. The last known population count sits roughly at about 50 individuals. Some believe they may already be extinct. Interestingly, it forms part of the crow family, Corvidae. Its plumage is a bright green color, with a crimson red bill, legs and circle around the eyes. Juvenile birds are a more blueish color, and grow greener as they get older. Adult birds in captivity can also turn a dull blue if they are not being fed a good diet.

Fun fact about the Javan Green-Magpie: Their bright green plumage is derived from the pigment lutein that comes from their insect diet. They will also sometimes eat small lizards and frogs.

The Javan kingfisher has a large red bill, reddish legs and blue on their wings and tail. They are known to stick very close to their nesting area and are quite territorial. These birds are also known to be solitary animals. Javan kingfishers can be found in a variety of habitats, such as marshes, mangroves, paddy fields, fish ponds, municipal parks and gardens, orchards, and pastures.

Fun fact about Javan kingfishers: Despite their name, they actually prefer insects, frogs and other prey taken from land or river banks to eat over fish and other strictly aquatic animals.

Jungle mynas are members of the starling family. A good identifying feather they have is the tuff of feathers that stick up at the base of the beak. They measure about nine inches long, with gray plumage, darker gray wings, an orange bill and yellow eye. The male and female look identical and cannot be distinguished from each other based on plumage. They are omnivorous and will predominantly feed on insects, fruit, and seeds which is foraged for on the ground.

Fun fact about Jungle mynas: In some places, they will perch on the back of water buffalos and other large mammals, picking the parasites out of their hair to eat.