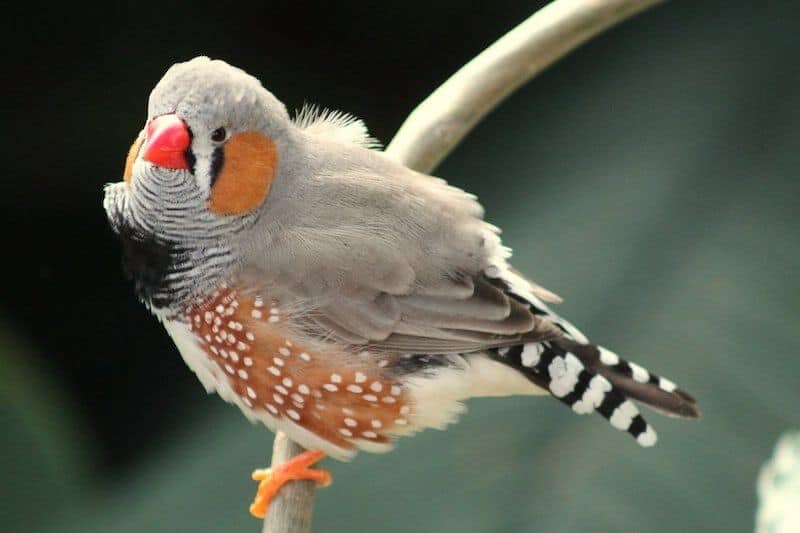 15 Birds that Start with the Letter Z

Here’s a list of 15 different birds that all start with the letter Z, starting with the zone-tailed hawk.

These medium sized raptors are a dark grayish-brown all over their bodies. In flight from below you can see their outer flight feathers are barred with dark tips. While still juveniles their tails will also have barring, but as adults they will appear solidly dark with two white bands. Zone-tailed hawks like to hunt for their prey of small birds, mammals, reptiles and amphibians in foothills, canyons and mesas.

Fun fact about zone-tailed hawks: As an observer from the ground, their coloring and flight pattern closely resemble that of a turkey vulture. Some researchers believe this may be on purpose, to fool their prey into thinking it is just a harmless vulture flying overhead rather than a predator.

Zenaida doves closely resemble the North American mourning dove, but are overall darker in color. One of the best identifying features of this dove is the bright white strip on the inner part of the wing. This is usually easier to see when the dove is in flight. Like most doves, zenaida doves feed on the ground eating mainly seeds and grains. They are found across many habitats in their range and often feed close to the water.

Fun fact about Zenaida doves: They are the national bird of the island of Anguilla in the Caribbean, and locals there call them “turtle doves”.

The Zino’s petrel is quite rare, breeding only on the island of Madeira. Madeira is an island in the Atlantic belonging to Portugal. This petrel makes it’s nest only on well-vegetated ledges in the central mountains on the island. They are only active at the breeding sites during the night, and spend the daylight hours at sea. This way, they can avoid predation by gulls active during the day. Once the breeding season is over the birds take to the sea, and not much is known about where they go other than they are occasionally sighted in other spots around the Atlantic such as Great Britain.

Fun fact about Zino’s Petrels: Their nests are in burrows they make themselves or old rabbit tunnels they find. Younger petrels will make shorter tunnels, while older petrels make longer tunnels.

Male Zeledon’s antbirds are all black and females are all brown. Both sexes have an unfeathered patch of blue around their eyes. They live in humid forests in lower levels of the canopy. As their name suggests they often follow swarms of ants, but it’s to catch insects that the ants disturb and flush from the forest floor.

This little wren is only found on the Zapata peninsula in Cuba, an is an endangered species. Zapata wrens are a grayish-brown with fine barring all over except for their plain, lighter throat and chest. They live amongst the thick shrubs of the Zapata Swamp and eat mainly insects, snails, spiders, tiny lizards and berries. Their greatest threats in this small habitat are fires, wetland drainage and habitat loss to agriculture, and predation by mammals such as rats and mongoose.

Like our #5 bird the Zapata wren, these sparrows are also mainly found on the Zapata Peninsula of Cuba. They are mostly a grayish-brown, with a yellow tinted chest, white throat and rusty cap. These sparrows live in grassland areas and may change its diet with the seasons. During the dry season, they focus on seeds, insects, flowers and snails, while in the wet season they have been known to eat more small lizards. Their current population is considered “neat threatened”. They face similar dangers to the Zapata wrens of wildlife and loss of habitat to tourism and agriculture.

Fun fact about Zapata Sparrows: While these sparrows were originally only found in the Zapata area, they can now be found in other regions of Cuba. This has lead to them sometimes being called the Cuban sparrow, and perhaps some day their name will be changed.

These little tapaculos have a brown, barred tail and rump, gray mid-body, white throat and white strip across the forehead. Compared to other tapaculos they are a little more “bold” and can be seen out in the open more often, perching on rocks or low vegetation. They like to forage on the ground among roots and ferns, although not much is known about what they eat. Living along the slopes of the Andes Mountains, they are often found amongst rocky slopes and ravines.

Fun fact about Zimmer’s Tapaculo: Even though they are only found in a small part of the world, they are not currently considered threatened or endangered. This is mainly because habitat loss is not likely at their preferred elevations of 5,600 – 10,500 feet in steep terrain.

These pretty woodcreepers are a warm chestnut brown with white streaks on the head and upper back. Their long, pale bill appears almost white. Woodcreepers generally keep an upright posture as they cling to trees and plants, with their tails pressed up against the trunk helping to support their weight.

Fun fact about Zimmer’s Woodcreeper: The preferred habitat of this woodcreeper is flooded forests. These are forested areas along rivers and freshwater lakes that are known to flood with heavy rainfall. These special freshwater swamp/flooded forests in the Amazon Basin are called Varzea.

The Zimmer’s Tody-Tyrant belongs to the flycatcher family of birds, specifically the tyrant flycatchers. These birds are known for being expert insect catchers and can catch flying insects in midair. Zimmer’s Tody-Tyrant is quite small for a flycatcher, with an overall olive-gray coloring and two yellow wingbars. They are often found in forests with low-quality soil or sandy soil or dry shrubland.

Fun fact about Zimmer’s Tody-Tyrant: You may have noticed a few other birds on this list who’s name start with “Zimmer’s”. This is in honor of the American ornithologist John Todd Zimmer who made birding expeditions to many places including Africa and Peru in the early to mid 1900’s.

These tiny birds have a short tail that is rounded at the end and tipped in white. They have a light throat and chest, slightly buffy sides, and a brown mottled back. Zitting cisticola’s are insect eating birds that live in grassland habitats near water. Males begin building the cup shaped nest deep in the grass, then invites females to have a look. When the female chooses a nest, she will finish building it. During the breeding season, males will fly in a zigzag pattern while making frequent “zitting” calls. These zitting calls are describes as sounding like someone repeatedly opening and closing scissors.

Fun fact about the Zitting Cisticola: They were originally known as the fan-tailed warbler, but was changed to be more consistent with other tropical cisticola species and to avoid confusion with a completely separate species of bird found in America also named fan-tailed warbler.

While female Zanzibar Red Bishop’s are a plain brown-streaked bird, males have much more striking plumage. Adult breeding males have a black face and underparts, while the top of their head and most of their upperparts are a reddish-orange. These bishops like to live in wet areas like flooded grassland and marshes.

Fun fact about the Zanzibar Red Bishop: Bishops belong to the same family as weaverbirds. And like weavers, these bishops will use long strands of vegetation to weave intricate nests. Zanzibar Red Bishop nests look like little baskets that hang from firm grasses.

It’s easy to see where Zebra doves get their name. Their bodies are various shades of pale brown and gray with heaving striping all over. They are also sometimes called the barred ground dove or barred dove. While southeast Asia is their original home, they have been introduced and subsequently populated other parts of the world such as Hawaii, Tahiti and the Seychelles. They enjoy both scrubland and open land such as farms, parks and gardens. Their main diet is grass and weed seeds which they forage for while scurrying around the ground.

Fun fact about Zebra doves: The only “colorful” part of their body is the bare light blue skin around their eyes and the tops of their beaks.

Zebra waxbills also go by the name orange-breasted waxbill. They are small birds with a red beak, gray back and red rump. Males also have a red eyebrow. Their underparts can be yellow, orange, red, or a combination of those colors depending on their location. They can be found in savannahs and grasslands south of the Sahara desert. Their diet is mostly seeds, plant shoots and insects and often hang out in small flocks.

These beautiful birds are often confused with the very similar looking blue-and-white flycatcher. Males are a beautiful bright blue with a white belly. Females and immature males have some blue coloring but all gray heads. These birds like to forage at mid-level in the canopy for insects, and can be found in forests, parks and most wooded areas. They are currently listed as “near threatened” but not much is actually known about their population size.

Recently the zebra finch was separated into two subspecies, one that lives in Australia and one that lives on the Sunda Islands of Indonesia. Both finches appear similar, with gray upper parts, and orange beak, light belly, buffy brown sides with white spots and black and white on the tail. Male finches sing loud and complex songs, and no two males sing exactly alike. They tend to breed in colonies and may even nest close together. Zebra finches build two nests, one for egg laying and one shaped like a dome just for roosting and huddling together for warmth.

Fun fact about Zebra Finch: The zebra finch is named for the white and black striping found on the throat of the Australian species. This species is well known as being a popular pet.