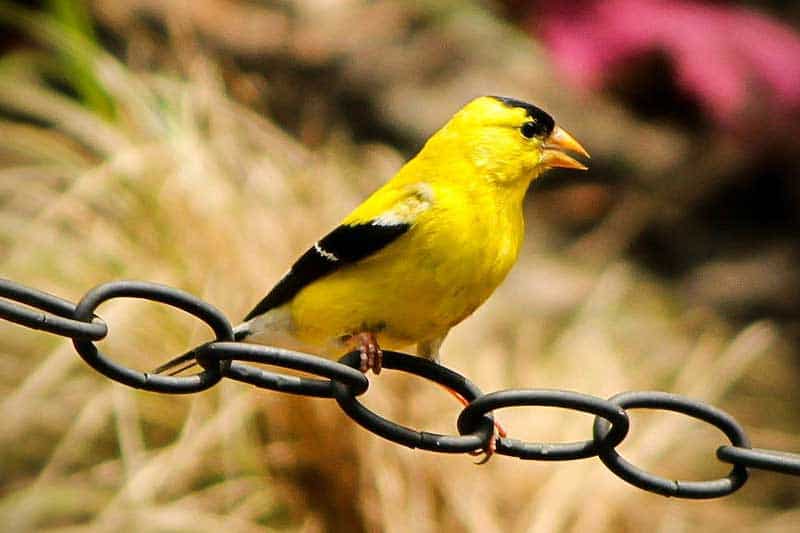 There are millions of birds found throughout the world. Drab to colorful, big to small, birds are found on every continent. We chose 16 birds for our list of birds that start with G, some are common enough to be found in your backyard while others may live in more remote or exotic locations.

Birds That Start With G

Below is a list of 16 bird species from ducks to owls, whose name starts with G. Let’s take a look at this beautiful and interesting birds! 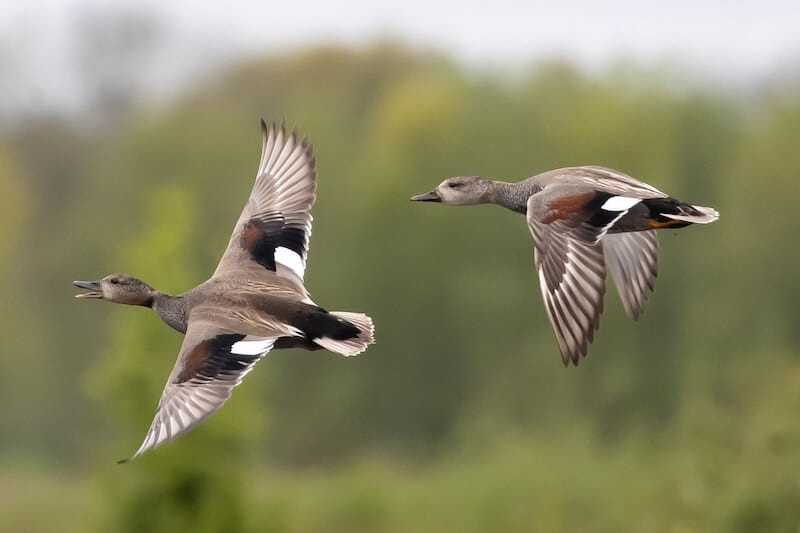 Gadwalls are a species of duck that eat aquatic vegetation. The males are defined by their black rump patch and black, white and brown patches seen on their wings during flight. The female’s color pattern is a mottled brown throughout with an orange beak where male’s beaks are mostly black.

Interesting fact about Gadwalls: Gadwalls sometimes steal food from other ducks, and the oldest known Gadwall was 19 years old. 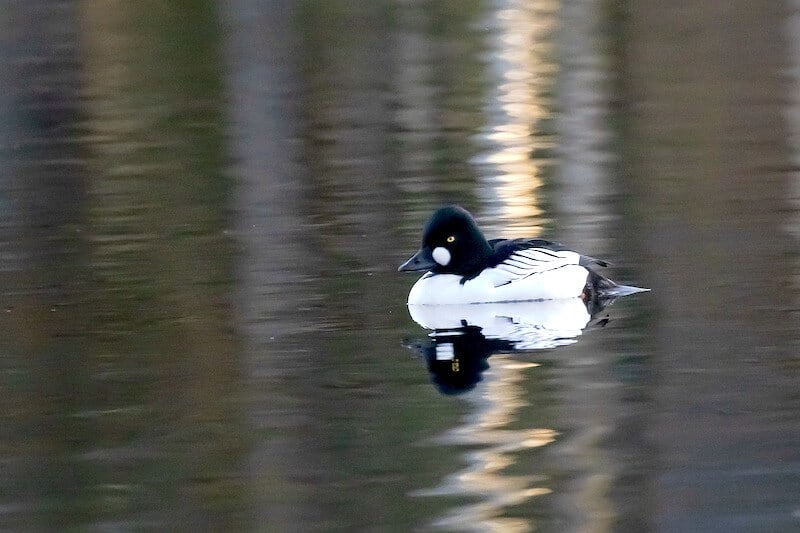 Lives in: Canada, the United States (especially northern), northern and middle Europe and parts of Asia

Named for their yellow iris, male goldeneyes have blackish-green heads with a white circular patch between the eye and the base of the bill. Female goldeneyes have brown heads, a whitish neckband, and gray back and sides. They are most known for their seemingly large heads and yellow eyes. The common goldeneye breeds on ponds, marshes and lakes.

Interesting fact about the Common Goldeneye: Hunters dubbed the goldeneye the “whistler” for the distinctive whistling sound of its wings in flight. Cold weather accentuates the sound.

Other Goldeneyes: another very similar species is the Barrow’s goldeneye, found almost exclusively in northern regions of the U.S. and Canada.

Lives in: Europe, across the Palearctic, southern Africa, India (Santragachi), Bangladesh (in the natural reservoirs of Sylhet district), and Australia.

A small duck found in or near wetlands. Males are most known for the large, white eye stripe on their heads. While they are not a colorful duck, their plumage is still a collection of beautiful patterns. Females who are mainly brown, are known to be difficult to distinguish from female blue-winged teal’s.

Interesting fact about Garganey: They are a monogamous bird species that breed in pairs. Females lay around 7 to 9 eggs per hatch.

The beautiful great gray owl is large, mottled brown and gray with an obvious circular pattern on the face. Their yellow eyes stand out against their pale gray face. This owl mainly sticks to boreal forest habitat where they fly silently through evergreens. They are masters at hunting small mammals, and will eat up to 7 mouse-sized mammals each day during the winter.

Interesting fact about the Great Gray Owl: they can break through very hard packed snow to reach small mammals underneath.

Lives in: Canada, southern Alaska and some northern U.S. states

Even though males are larger than females, the sexes are hard to tell apart. Plumage is a mixture of whites, browns and grays in a variety of different patterns. They have feathered nostrils and their legs are covered in feathers down to the toes. This mixed plumage makes the ruffed grouse perfect and blending into its surroundings, the forest floor. They typically only fly in short bursts and mainly stick to walking along the ground.

Other Grouse: there are over ten other species of grouse world wide.

Lives in: along the Pacific coast of North America and far western Asia

A large and stocky, gull with grey wings, white body, and heavy yellow bill. The tips of the feathers along their wing are white, which helps in identification as most gulls have black-tipped wings. They become heavily molted and turn brown in the winter. They look for food along rocky shorelines, tidepools and even local parks and landfills.

The greater white-fronted goose has a stocky body with short orange legs and a reddish-orange beak. Their body is an overall grayish-brown with a white rump and white ring around the bill. They are often seen hanging out in larger groups of Canada Geese.

The common greenshank is a small to medium-water dwelling bird with long slender legs and a long slender bill. Their long legs allow them to wade through shallow water looking for food, while their long bill probes under rocks and shells. Their bills are slightly upturned, and their legs have a light greenish hue.

Interesting fact about Greenshank: After establishing territory, they have been known to engage in fighting and singing. 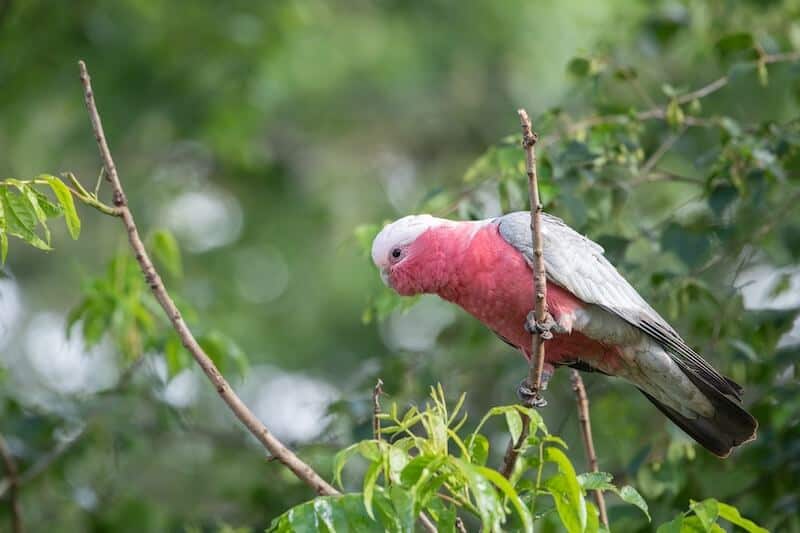 Galahs are also known as the pink and grey cockatoo or rose-breasted cockatoo. They are large parrot with grey wings, a pink body, and a light pink “cap” of feathers on their head. The sexes can be distinguished by eye color; the males are dark brown and the females pinkish red.  They are found throughout the majority of Australia and have seemed to thrive with the changes brought by European settlement, whereas most species have suffered due to habitat loss.

Interesting fact about Galah: They are known to travel in flocks reaching the thousands.

Great-tailed grackles often appear black in color, but in the right light you can see hues of blue, green, and purple. They sometimes will roost with other types of blackbirds. Males are easy to identify by their solid coloring, long narrow body with extra long tail, and yellow ringed eye. Females are about half the size of the males, and while they share the yellow eye they are a dark brown above and paler brown below.

Interesting fact about Great-tailed Grackles: One of their largest winter roost groups occurs in the sugarcane fields of Texas’s Rio Grande Valley, where they can number in the millions.

Lives in: North America, Europe and spotted throughout Asia.

There are many species in the Goshawk family, the one that can be found in the U.S. is the northern goshawk. All goshawks are birds of prey that hunt small birds and mammals for food. The northern goshawk has a dark gray back and white and gray stripped chest and belly. They have a distinctive red eye, and a large white eye stripe. Northern Goshawks are secretive and live in large tracks of forest, not a bird you would likely see in your backyard.

The gyrfalcon is the largest falcon in the world with a 48 inch wingspan. They live in the high arctic and nest on cliffs. As a hunter their most common food source is ptarmigan, a ground bird in the grouse family. While they don’t nest anywhere in the U.S. they do sometimes visit the states along the northern border during winter. Gyrfalcons come in two color morphs, a dark gray back banded with white, or a white back flecked with black.

Interesting fact about the Gyrfalcon: during the breeding season a Gyrfalcon family needs 2-3 pounds of food per day.

The gila woodpecker is an expert of living in treeless deserts, as long as there are Saguaro cactus. The gila digs out its nest at the top of the cactus, then waits for the pulp to dry out before moving in. Gilas have a tan head and belly with bold black and white barring along the wings and tail. Males have a red patch on their forehead while females do not.

Interesting fact about the Gila Woodpecker: After digging out their nesting cavity in the cactus, the woodpecker will wait several months before moving in. This is so the inner pulp of the cactus can dry and harden. 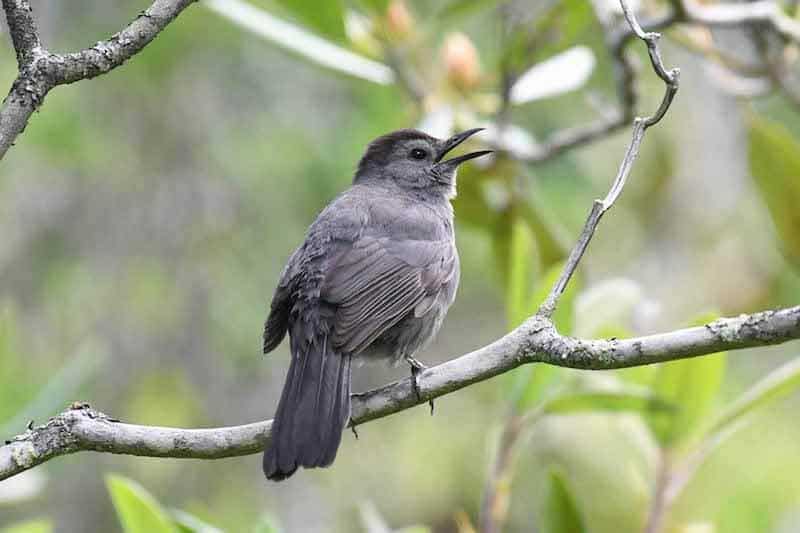 Catbirds are robin-sized birds with dark slate gray coloring all over, a black cap on top of their head and a long tail. They have a rusty red patch just beneath their tails. Catbirds love to sing and similar to mockingbirds have the ability to copy and repeat what they hear. They will often string together several songs copied from other birds to create their own song.   Catbirds love to eat fruit and are attracted to native fruit-bearing trees and bushes.

Interesting fact about Gray Catbirds: they get their name from a call they frequently make that sounds like a mewing cat.

This large member of the flycatcher family migrates to the eastern U.S. each spring to breed. They are about the size of a robin, with a warm brown back, gray face and yellow belly. The crest on their head isn’t very tall, but it does give their head a bit of a squared-off appearance. Great crested flycatchers spend a lot of their time high up near the tops of trees, so they can be hard to spot.

Interesting fact about the Great Crested Flycatcher: they often use snakeskin as part of their nests. In places where shed snakeskin is easy for them to find, such as Florida, nearly every great crested flycatcher nest will have it. 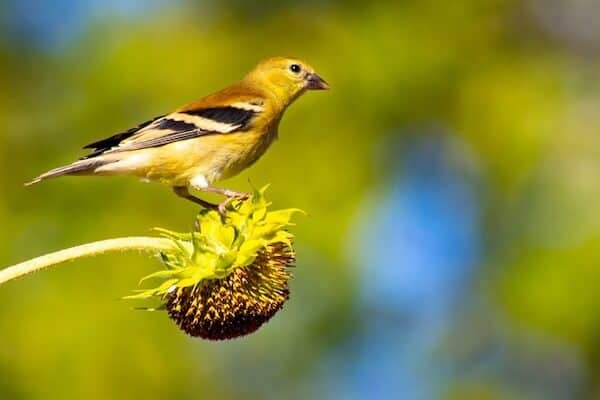 The American goldfinch has bright yellow feathers in the spring and summer. During this period they are mostly yellow, or “gold”, with black-tipped wings and males have a black cap on top of their heads. During winter they will molt and their bright yellow fades out to a more dull brownish or olive tone. You can always recognize them any time of year by the black on their wings, and their finch-like beaks.