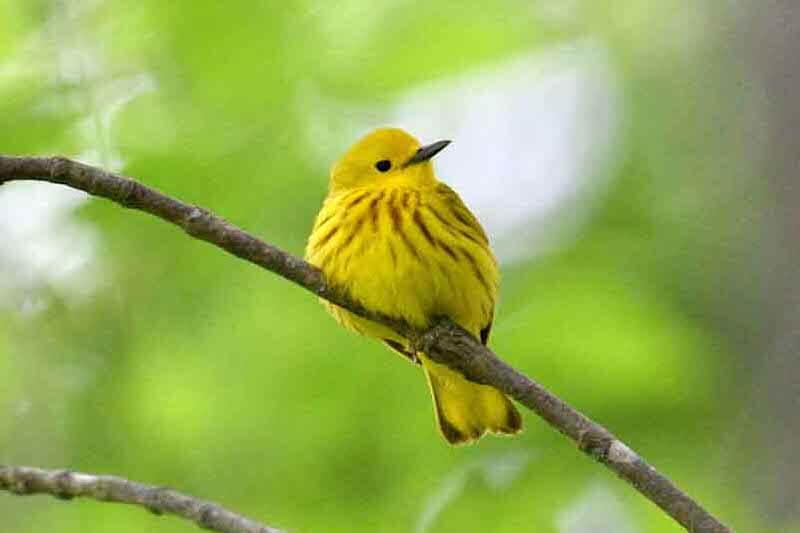 There are so many birds of all colors, sizes and types found throughout the world. We chose just a small sampling of 17 birds for our list of birds that start with Y. Y is a less used letter of the alphabet when it comes to bird names, and you’ll see in our list that many of these birds are either named after the color yellow, or for a region of the world they are from.

17 Birds that start with Y

Below is a list of 17 bird species whose name starts with Y. Let’s take a look at these tantalizing, terrific and tremendous birds!

Aptly named, the yellow warbler is yellow throughout its whole body. Their chest and head tends to be brighter while their back can be more of a darker, olive yellow. Males have some reddish-brown streaking on their chest.  Yellow warblers spend the winter in Central America and northern South America, then migrate up into the United States and Canada to breed in the spring.

Their preferred habitat is thickets and small trees near wetlands or streams and they eat only insects. These birds are so small and light, they have been observed getting caught in the web of orb weaver spiders. On the other hand, they are mighty enough to fly across the Gulf of Mexico in one non-stop flight.

This woodpecker, also sometimes called the red-vented woodpecker, lives across Mexico’s Yucatan Peninsula. Their back and wings have heavy black and white striping, with a pale head and chest. Males and females have red at the back of the head, with is more prominent in males, and both have yellow above the beak.

Yellow-billed loons can be found across much of the High Arctic as well as Alaska, western Canada and northern Europe. Their black and white body plumage is very similar to the common loon, but their bill is a pale yellow with a straight upper edge and lower edge that curves upwards.

Their population has dwindled and they are considered an international species of concern. According to the national park service, they are in the top 10 rarest birds that regularly breed on the mainland U.S. About 25% of the total population comes to breed in Alaska. Their nests are in low vegetation very close to the waters edge, giving them quick access to the water where they thrive. Loons are amazing swimmers and divers, but can’t really walk around on land.

The Yungas pygmy owl can be found in the Andes mountains from Peru south to northwestern Argentina. They like habitats of montane and cloud forest with lots of undergrowth and moss. These owls are active at dawn, dusk and during the night.

They forage though dense foliage for insects, arthropods and sometimes even small birds.  Three plumage color variations exist, a brown, a rufous and a more rare gray. On the nape of their neck they have a pair of “false eyes”, black feathers surrounded by white that appear as eyes from a short distance away.

The yellow-bellied sapsucker, a member of the woodpecker family, is known for drilling rows of holes in the bark of trees to create sap-wells they can drink from. They have a stocky, speckled black and white body with hints of yellow, a black and white striped face and red cap. Males have a red throat patch and females do not.

While they have a preference for birch and maple trees, they have been documented drilling sap-wells in over 1,000 species of trees and woody plants! These sapsuckers breed in the northern U.S. and Canada, then spend the winter in the southeastern U.S., Mexico and Central America.

In typical flycatcher fashion, the Yucatan flycatcher has a brownish-gray head and back, gray throat and yellow belly. There is a small crest at the top of their head they can extend or lay flat. These flycatchers, as their name suggests, are found across the Yucatan Peninsula but also parts of Belize and Guatemala. You can find these birds in tropical woodland and aside from catching insects they also eat fruit from trees like the gumbo limbo.

Females share the same color pattern as their male counterparts, but the colors may appear duller overall and markings less distinct. Like most warblers, their colors will be the most crisp and bright in the spring, and fade considerably during the winter.

Yelkouan shearwaters are sea birds that breed on islands and cliffs in the Mediterranean, then spend the winter at sea. They hold their wings very stiff with few flaps, tilting from side to side almost touching the water.

Their diet is mainly fish and mollusks, and they sometimes follow fishing ships for scraps that might be thrown overboard. Some of their populations are at risk due to human development close to their breeding sites, as well as an increase in rats and feral cats that can prey on eggs and young birds.

Yellow-billed cuckoos breed in the eastern United States and Caribbean, then migrate through Central America to spend the winter throughout South America east of the Andes. They are long and slender birds, with brown upperparts and white underparts. They sport a yellow and black beak, rusty patches on their wings and large white spots on their tail visible from below.

Their habitat is deciduous forests where they sit very still among the trees hunting caterpillars. This species of cuckoo has one of the quickest nesting periods, being able to go from freshly laid egg to fledgling ready to leave the nest in as few as 17 days.

These juncos have a gray body with brown on their back and wings, and their distinctive yellow-orange eye. They live mainly in mountain forests in Mexico to Guatemala but are also found in the mountains at the far southern tip of Arizona and New Mexico. Native peoples from Mexico used to call them “lightning bird” or “caster of fire” due to their bright eyes. They believed the birds could absorb sunlight to then later release at night.

Native to the Yucatan Peninsula, these jays have a striking plumage with yellow legs, a black head and underparts and bright electric blue back, wings and tail. Juveniles have a yellow bill, and will continue to have a yellow bill for a few months even after the rest of their adult plumage has come in.

Yucatan jays often hang out in groups and can chatter quite noisily. They are considered common within their range and so far have seemed pretty adaptable to human impacts on the habitat.

These unique herons can be found in the eastern United States and Caribbean, as well as coastal areas of Mexico, Central America and South America. Their name might make you think they are nocturnal, but they actually forage for food at any hour of the day or night.

In coastal areas they like to hunt on the beach within the window of 3 hours before high tide to 3 hours after, no matter at what time of day that occurs. A yellowish plume of feathers across the top of their head gives them their name. Crustaceans such as crabs and crayfish are their favorite food, which they hunt by slowly stalking through shallow water.

It’s hard to mistake the boldly colored yellow-headed blackbird. Males have a dark body with bright yellow head and chest. Females are more brown than black, with yellow and brown mottling on the head. These blackbirds like wet areas such as prairie wetlands, mountain meadows, marshes and shallow ponds.

They will nest in the wetland reeds and cattails, then forage for seeds and insects in nearby grasslands, savanna and cropland. Nests are always build directly overhanging water, and sometimes nestlings fall out and have to try and swim to surrounding vegetation.

Yellow-headed blackbirds migrate from Mexico and the southwestern U.S. in the winter to spend the summer in central and western parts of the United States and western Canada.

These tiny birds have a white eye-ring, gray head, olive-yellow body and a long black strip that runs from their beak, over the head to the nape of the neck. You’ll find them in tropical and subtropical forests of southern China, Myanmar and northern Indochina. They are known for being noisy and rather conspicuous, the dominant bird in most mixed flocks.

This parrot is distinguished by its bright yellow head and red shoulders. Unlike most parrots, Yellow-heads are fairly silent when they fly. When they are being noisy, they make human-sounding screams.

Yellow-headed Parrots are native to Mexico and Central America, and are unfortunately endangered. They are on the CITES Appendix I, which means the import and trade of any wild-caught birds is illegal and the trade of birds bred in aviculture are subject to control in most of the world.

This small nuthatch has similar coloring to many other nuthatches, with a gray back, white underparts and a thick black eye stripe. They are found in southwest China, in the Yunnan, Sichuan and Guizhou prefectures. While they don’t “sing songs”, they are known to be rather noisy, making repetitive nasal calls. The full scope of their diet is unknown, but they have been observed eating insects they catch on pine branches.

The yellow-chevroned parakeet is a mostly green bird with a pale pink beak and yellow edge along the wing. This species is closely related to the white-winged parakeet, and the two were considered the same species until 1997. In its native habitat of tropical Brazil to Paraguay, it feeds on seeds and fruit. However there are feral populations in Miami, Los Angeles and San Francisco that have adapted to consume nectar. They also will stop by feeders if they are out!