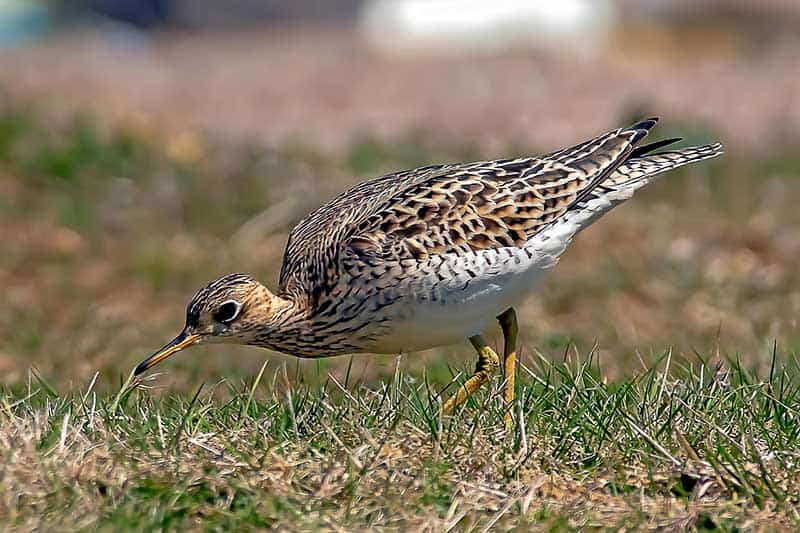 From the upland sandpiper to the unicolored blackbird, below is a list of birds from all over the world that have one thing in common. These birds all start with the letter U.

Let’s take a look at these amazing birds!

Birds that start with the letter U

These sandpipers are buffy-brown and have small heads, long necks, big eyes, and a yellow bill with a black tip. These birds have a long tail and wings that flutter give it a unique appearance in flight. The young sandpiper is known as a peep.

This is an unusual partridge that lives in the forests of a small range of mountains in central Tanzania. The Udzungwa partridge’s back is barred, brown, and the underparts are gray and have black scallops, while its bill is red.

This bird was discovered in 1991 and is endemic to the Udzungwa Mountains National Park in Tanzania. Look for them particularly in steep areas with bamboo.

The ultramarine grosbeak is a beautiful, dark blue bird that lives in South America. The male is predominantly deep cobalt, with lighter shoulders and eyebrows and an elongated dark patch around the eyes. Females are rich reddish-brown in color.

They are usually found in pairs in woodlands with scrubby vegetation, typically near water. It likes skulking in thick thickets while foraging. The word ultramarine is a reference to the color of their bodies.

As with most jays, they are found in groups and often in conjunction with mixed-species feeding flocks, which comprise of woodcreepers and orioles.

The uniform treehunter is a medium-sized bird found in the lower subtropical zone of the west Andes in Colombia and Ecuador. It’s a plain dark brown bird with small streaks and a light eyebrow along with some streaks on the neck. Individuals or pairs travel in mixed-species flocks in the understory, and are often obscure and hard to spot.

The Ural owl is named after the Ural Mountains in Russia. These owls are common in Russia, Scandinavia, Central Europe, and Eastern Europe. They have at least 15 recognized subspecies. Ural Owls have broad heads with large facial discs and a long, wedge-tipped tail.

Although their colors may differ, the most common species have grayish upper and lower bodies and white underparts. They exhibit reverse dimorphism, meaning females are larger than males.

Both genders have bills and irises that are dark, their feet and legs differ. Upland Geese often eat in large groups of hundreds.

They have two distinct white lines that look like eyebrows. Ultramarine Flycatchers are sexually dimorphic. However, little is known about the physical appearance of females.

These birds belong to the icterid family and prefer to be found in swamps and grasslands of South America. They are a resident species that are residents of their breeding grounds throughout the year.

Unicolored Blackbirds are omnivores. They love eating fruit but they also hunt for insects and earthworms. It lives on floating plants and hunts for food among reeds, never leaving the water.

These birds are not migratory and prefer to live in open mountains within their small range. They are only found in a limited area of Central America and Southern Mexico.

Unspotted Saw-whet Owls have a small, round body, with large wings and a short tail. Adults are dark brown on their heads and upper body with white markings across their wings.

Fun fact: A group of owls is often referred to as a ‘parliament’.

They are also called ‘Pihiti’ or ‘Pihitikua’ by Marquesas Islanders because of the distinctive sound they produce.

Being the largest species in the Buteo genus, it is believed that the Upland Buzzards constitute an Asian Raptor species. Because of their secluded characteristics, many birdwatchers believe their status as a species is in danger. Upland Buzzards are migratory but only travel a short distance to keep food supplies from depleting due to snow.

They aren’t often seen, but they have a wide habitat area. The IUCN has confirmed that their population falls under the Least Concern species list, meaning they are not endangered. It seems that they’re just very, very good at hiding!

Belonging to the Tapaculo family from South America, the Unicolored Tapaculos are South American passerine birds originating from the Peruvian country. Peru.

In the past, it was believed to be the case that the Blackish, as well as the Trilling Tapaculos, were subspecies of these birds. However, they are now considered to be separate species. Unicolored Tapaculos are tiny birds, growing less than 4 inches in length.

While birding the patch during the spring, several Upcher’s Warblers were observed with the most daily count of five birds. They are primarily observed in the scrub and bushes surrounding spray fields.

The tail of Upcher’s Warbler is long and full and gets darker towards the edge. The tail moves in a slow swinging motion that is often sideways and downwards and also fanned. Henry Baker Tristam named this species in honor of one of his closest friends, Henry Morris Upcher.

There are at least 438 species of tyrant flycatchers, the Urich’s Tyrannulet is just one. They are tiny birds that are mostly olive-green or brown-gray on top and lighter colors such as whitish light yellow and beige on their undersides. They eat dragonflies, bees, and other larger insects.

These ‘tyrant’ flycatchers are named this because of their ferocious nature and ability to chase away intruding birds as much as three times their size if the intruders venture too close enough to their nests. Urich’s Tyrannulet are endangered and only occur in a small area in northern Venezuela.