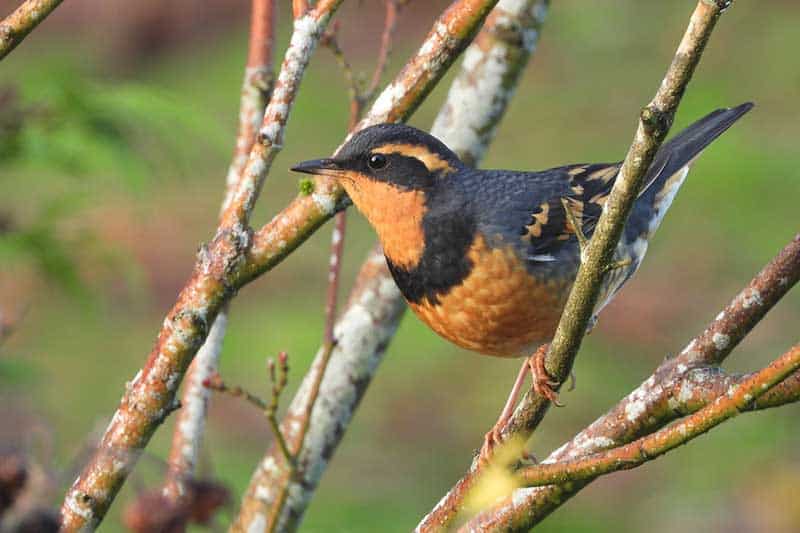 From flycatchers to hummingbirds, below is a list of primarily North American birds that have one thing in common. These birds all start with the letter V.

Birds That Start With V

Tiny, distinctive songbird with sharply pointed bills. Most of the time, plain gray with an orange head. Small, rufous patches on shoulders can be seen. Verdin hunt on their own or in pairs in arid scrub habitats, particularly mesquite.

Sometimes, they visit hummingbird feeders to get nectar. The male begins to build nests to attract potential females. When a female joins the male, they finish building the nest together. They occur in the southwestern U.S. and Mexico.

Warm-colored thrush that has bright reddish-brown shades all over, a buffy breast, and a white belly. They are most often found in more humid areas. In the evening, the male sings a sweet, ethereal, downward warbling song. Both genders are quiet and shy.

The Veery is the least-spotted of all American thrushes, yet it is also the most easily identified. This species lives in southern Canada through northern Georgia. Spends its winters in central Brazil. 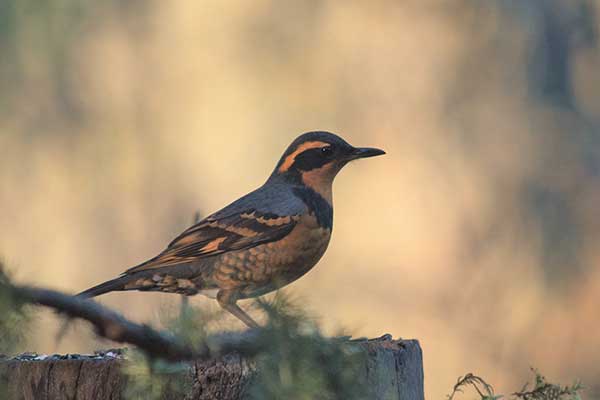 A beautiful boldly-patterned and brightly-patterned Thrush that is boldly-patterned. Males have a stunning mixture of blue-gray, orange, and black. The varied thrush occurs in Alaska, Yukon, and the western part of the Northwest Territories south to Oregon, California, Idaho, and Montana.

They breed in mature wet forests of the Pacific Northwest and are found in an array of forests with fruiting plants in winter. The Varied Thrush is an aggressive species and bullies other feeder bird species.

A feathered flame in a desert, the male Vermilion Flycatcher does precisely as the name implies. A stunning red bird that can hawk flying insects from high perches on tops of the shrubs and fences.

‘Pyrocephalus,’ the Vermillion Flycatcher’s genus, means ‘fire-headed.’ Vermillion flycatchers are common in much of South America and southwestern USA.

This highly secretive bird lives in freshwater marshes where it is often hidden among the dense vegetation. However, the Virginia rail’s loud, booming groans can signify its presence. In some areas along the east and west coast they remain all year, while another population winters along the U.S. south and in Mexico then migrates up to the northern half of the U.S. and southern Canada to breed.

It has a reddish-orange colored bill, a brown body, gray face and some black-and-white barring along its lower sides. The forehead feathers of Virginia Rails are built a little tougher, to endure wear and tear from pushing through thick and sometimes sharp marsh plants.

These medium-sized sunbirds live in the scrublands of Africa, South Asia, parts of the Middle East, and Australia. Breeding males are quite colorful with blue, green and purple metallic head and back feathers with brightly colored bellies that are usually yellow but can also be orange or white. Females and non-breeding males are not so colorful, sporting dull olive and yellow plumage.

Their longer bill has a downward curve to help them reach into flowers for nectar. Sunbirds have a high metabolic rate and require a steady flow of fuel from their diet.

These small birds from Australia and New Guinea have a lengthy tail which is typically held up in a cocked position. Breeding males have a blue helmet, chestnut shoulders, black breast, and royal blue back. Females are grayish with light fronts, long blue tails, and dark red patches that run between the eye and bill.

Fairywrens engage in cooperative breeding, where they gather in small groups to defend their territories. There is usually one breeding pair and several “helpers” that will aid in raising the young. During courtship, males may offer yellow flowers to females.

The Vaux’s Swift lives along the western seaboard of the USA, Mexico and Central America. Small for a swift, these grayish-brown birds fly with stiff and quick wingbeats. They spend most of their time in the air, catching flying insects in flight.

Because it relies upon large, hollowed trees as nesting sites, the species has become scarce since the old-growth forest that once dominated the northwest have been wiped out. They may sometimes nest in chimneys. In some nests, a couple of non-parental adults can help parents feed the nestlings, like bird foster care.

Large scoter that has a distinctive white patch on the wings, which is difficult to see when the wings are folded. Dark chocolate-brown all over, males tend to be darker than females and bear tiny white spots under their eyes and bright orange on their beak. Females have two rounder white spots on their faces.

These birds occur in Scandinavia, Britain, and (rarely) Ireland, and breed near water in woodlands across a large portion of northern Europe. A group of scoters is known collectively as a mooter or scooter of scoters.

Check here for photos of the Venezuelan Flowerpiercer.

Males of the species are all black, while females are a mix of yellow-olive and gray. When flying, you can see bright white on the underside of the wings. Their bill has a slightly downward curve that ends in a hook at the tip. This bill gives a clue to their name, as they use it to pierce the base of flowers to get to the nectar within the flower. A different method than many other nectar drinking birds that simply have long bills then can stick inside the flower.

Verreaux’s eagle is a giant black eagle that occurs in sub-Saharan Africa. Mostly dark all over, they have white near the ends of the wings and on their backs. This unique raptor is found soaring near cliffs and mountainous terrain. These eagles are highly adapted to catching their favorite prey, the rock hyraxe, which is a small rabbit-like mammal. They nest and live in kopjes, a particular dry rocky environment. Because of their dependence on kopjes and the rock hyraxe, they are found in very specific areas and have not yet shown to be adaptable to other locations.

Village Weavers, also known by the name of ‘Black-Headed Weavers,’ are the largest in Africa. Breeding males are bright yellow with black one the wings and face. Females lack the black face, are a more olive-yellow overall with brownish wings. Both species sport a red eye.

These weavers use grasses and leaf strips to construct their enclosed pocket-like nests, which are suspended from a tree branch. They are colonial breeders, which means they will nest in groups and many nests may hang from the same tree.

Violet-Capped Hummingbirds are a near-threatened hummingbird species found in Panama and northwestern Colombia. Males and females look similar, with an emerald-green body, purple forehead and brownish-purple tail. They feed on nectar rich flowers at low and middle levels of the canopy. If near human activity, they will visit hummingbird feeders.

Volcano Juncos are tiny sparrows that live in the montane forests of Costa Rica and western Panama. Overall, they have a grayish appearance, with brown and black wings. These birds prefer having an omnivorous diet that includes seeds and insects. However, during the breeding season, they feed on insects exclusively.

They breed at higher elevations, typically above the timberline. The Volcano Junco is sometimes said to look a little “evil” due to their distinctive yellow eyes set in a black mask. But these little sparrows can’t harm you, and are quite quiet and well-tempered birds.

Violet Cuckoos are a partially migratory cuckoo species native to southeast Asia. They creep up and down branches searching for insects, but can also catch them in the air. Fruit also makes up part of their diet. Cuckoos lay their eggs in the nests of other bird species, leaving them to do all the hard work of parenting.

Varied buntings are mainly found in Mexico, with just a few populations showing up along the border in Texas and Arizona in the summer. Males have colorful berry-tones of red, blue and purple, while females are overall tan. They tend to stay away from human-populated areas and bird feeders, preferring to forage for insects in low vegetation. Eggs of the varied bunting can be blue or green, which is unusual among songbirds who usually do not show variety in egg color.

Violet-green swallows can be found across western North and Central America, spending the winter in Mexico and Central America and coming up into the U.S. and Canada during breeding season. Like other swallows, their specialty is aerial acrobatics, turning and diving over bodies of water catching insects in the air. They are starkly white on the cheeks, throat and chest, with metallic purple-green wings that can sometimes look brown in certain lighting.

Vesper sparrows have a streaked back and wings, light brown streaking on the chest with a plain belly, a white ring around the eye and white outer tail feathers. This sparrow of fields and grasslands can be found in the northern half of North America during the summer breeding season, and southern North America in the fall and winter.

Vesper, meaning “evening song”, describes this sparrows habit of singing after sunset when most other birds have gone quiet. They like to be out in the open when they sing and will choose elevated perches such as wires, the top of fence posts, and the tops of shrubs.

Verreaux’s eagle-owl can be found across sub-Saharan Africa, and is also known as the milky eagle owl or giant eagle owl. It is the largest owl in Africa, coming in just over two feet in length. Their feathers are mainly various shades of gray, with their only distinctive feature being their pink eyelids. No other owls known in the world have pink eyelids. They have a very deep “gwok” call, which some have remarked sounds closer to a panther than another bird.