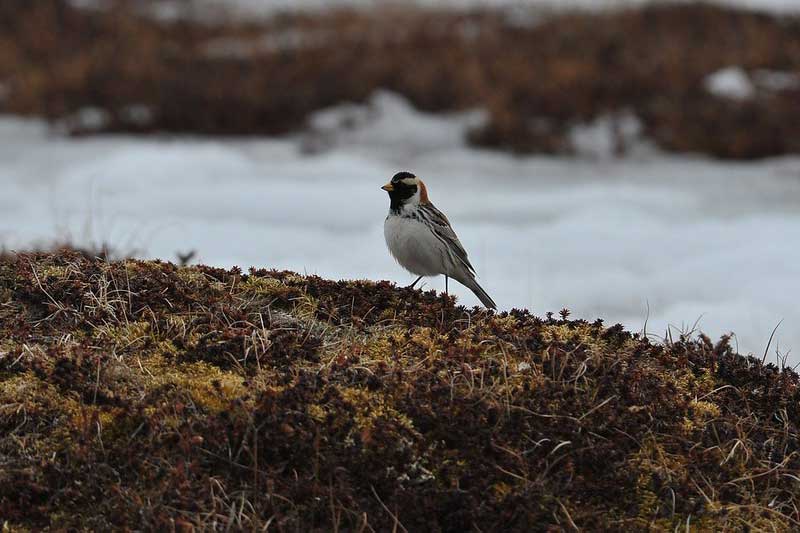 Birds come in all shapes and sizes and have names starting with every letter of the alphabet. There are quite a few types of birds that start with the letter L, in this article we’re going to give you an up-close look at some of them. Let’s take a look at 22 different species of birds that all start with L.

22 birds that start with the letter L

Here’s a list of 22 different birds that all start with the letter L, starting with the Limestone wren-babbler.

The Limestone Wren-babbler lives in Northern and Eastern Thailand. It’s an unremarkable, dark-brown bird, with a streaked throat. It tends to forage on the ground and nests in shallow, naturally occurring holes in large rocks, or in limestone cliffs.

The Limestone Wren-babbler’s identity is not clear, because the bird has been split into three different species.

The Lark-like Brushrunner is a small South American bird with a spiky crest and a brown coloring that conceals it in the scrub and woodland, where it forages. It builds a covered nest that looks like a Dutch oven, which it then covers with leaves and twigs to conceal from predators.

Lark-like Brushrunners are family birds and may form mixed-species flocks when it is not breeding season.

The laced woodpecker lives in Southeast Asia, and has a green back and grey face. The male has a red crown. The Laced Woodpecker feeds on insects that burrow into and infest trees, earning them the nickname “the tree doctor”.

Fun fact: The Laced Woodpecker’s call changes when confronted with predators or intruders.

The adult pheasant is roughly 100 centimeters in length, with the tail accounting for 80cms of this. The male is striking, with black and white coloring and a red crest. The female is a duller brown in color. They live in thick, dark undergrowth and are difficult to spot.

Fun fact: The name comes from Sarah Amherst, who sent the first specimen to London in 1828.

Lives in: African and Southeast Europe

The Lanner Falcon is fairly large for a falcon, and hunts by pursuing prey horizontally, rather than diving from a height. The Lanner Falcon is more common in parts of Africa than Europe, and assists in controlling pests in the mountains of Ethiopia.

Fun fact: Lanner Falcons have been bred in captivity for falconry since at least the thirteenth century.

The Lake Duck is partially migratory: some of the population migrates while some of it stays resident. It lives in wetlands and lakes with large amounts of vegetation in southern parts of South America, where it feeds on small invertebrates and plant remains.

The male and female warblers are identical, with a brown, flecked back and grey underparts. The female lays five eggs in a grass tussock, often close to water. Lanceolated warblers are native to Northeast Russia, Japan, and Southeast Asia.

These birds have fantastic camouflage and are not easy to spot unless they hop about or are singing. Because the bird moves its head when calling, it is often difficult to work out where the sound is coming from.

Fun fact: The Lanceolated Warbler’s beak has two colors: dark brown on top and pink on the bottom.

The Laysan Albatross is about 80 cm in length, with a wingspan of roughly 200cm. It has a dark grey back and its underparts are white. Female Laysan Albatrosses may bond and raise their young together.

They nest on tropical Pacific islands like Oahu and Kauai in Hawaii. There were an estimated 1.2 million breeding adult Laysan albatross in a study done in 2009.

Fun fact: A female Laysan albatross named Wisdom (pictured above) was tagged in 1956 and is estimated to be 70 years old.

The Ladder-backed Woodpecker dwells in the desert and desert scrub in the Southwestern United States, and used to be called the “Cactus Woodpecker”. It is a distinctive bird with black and white stripes on its back and wings. The males have a red crown.

Fun fact: Ladder-backed Woodpecker males and females forage together, concentrating on different parts of the tree.

The ladder-tailed Nightjar has “ground-cover” coloring, which allows it to conceal itself. The nightjar is a brave bird and uses a distraction display to draw predators away from the nest. It has large eyes and a large wide mouth, which help it hunt at night.

The Ladder-tailed Nightjar is sometimes called a “goatsucker”, because they were often seen in fields with goats and it was assumed they were there to suck the milk from the teats of the goats.

Lagden’s bushshrike is native to Africa. It is a striking bird, with its bright yellow throat, breast, and underparts and its solid grey head.  Its beak is flattened laterally, making it perfect for catching the insects, small snakes, and lizards they eat.

The Lagden’s Bushrike communicates with hoots and whistles. Lagden’s bushrikes have yellow breasts if they live in the east of their range, and orange in the west.

Lapland Buntings are migratory birds, moving from Northern Europe to the Eastern UK for winter. They are small, round birds, with yellowy-brown back and wings and a white underside. Their colors can change over summer.

They are omnivores, mainly eating seeds, but also eating insects in winter. Lapland buntings stay close to the ground and move slowly, so they seem to glide along.

The Lemon Dove blends into its sub-saharan African environment with its grey plumage and cinnamon breast. The male is recognizable with his glossy, greenish neck.

Unlike other doves, the Lemon Dove spends time on the ground, foraging for food. Pairs of breeding Lemon Doves are monogamous, mating for life.

The Large grey babbler is quite a plain grey-brown bird, with a dark grey face, from which the bright yellow eye stands out. They spend time hopping around on the ground in flocks and are very lively birds.

Fun fact: The babbler gets its name from its call, which is loud and insistent: a babble of noise. 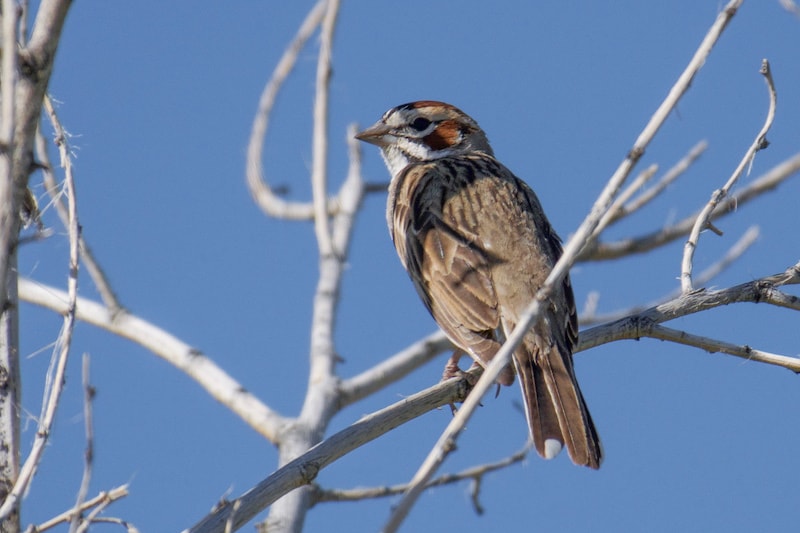 The lark sparrow is fairly large amongst sparrows. It has a grayish brown body, with spots on its tail, but it is the black, white, and brown striped face that makes it stand out.

The male’s courting display is a series of hops and couches. It is a fairly common bird and occurs in quite a large area. Female Lark Sparrows can use old mocking bird nests at times, instead of their own.

If you’re lucky enough to live within their range, you might just see one of these guys at your bird feeder. Lazuli buntings are common feeder birds in much of the western half of the United States during the spring and summer. Most migrate into Mexico for the winter.

The male has a bright blue head and an orange-colored breast while juveniles and females are a grayish brown colors and have cinnamon or tan breasts. Lazuli buntings eat proso millet, sunflower seeds, or nyjer thistle, so offer that at feeders if you’d like to attract them.

If you’ve been to a Florida beach before then you’ve probably seen large numbers of shorebirds like laughing gulls. They frequent beaches, parking lots, and anywhere they can forage and scavenge for food with in close vicinity of the coast.

They get their name from a high-pitched laugh “ha… ha… ha…” you can hear them make. They feed on small fish, crustaceans, and insects but they also look for food left by humans in populated areas.

This species is found in Mexico as well as states like New Mexico, Texas, and Oklahoma north into Southern Canada. They’re migrating birds and spend their winters in Mexico or a few southern states.

Lark buntings are actually endemic to grasslands of North America. They aren’t common in backyards, but may show up from time to time if you live within their range. Males are mostly black with white patches on their wings, females are brown with streaks.

The Lawrence’s goldfinch is one of North America’s most colorful birds but unfortunately for the rest of us you only get to enjoy seeing this bird if you live in Arizona, New Mexico, California or Northern Mexico. Lawrence’s goldfinches have a very limited range and many breed only in California.

You may be able to attract a Lawrence’s goldfinch to to a feeder by simply using a good finch feeder and along with some nyjer. Both the male and female have yellow markings, but the male’s colors are much brighter and cover more of his body. The male also is the only one to have the black mask and crown.

Aside from the southern tip of Florida, least flycatcher are rare anywhere in the country aside from far northern states like Vermont, Michigan, or Wisconsin where they breed.

They spend their winters in Central America, but you may spot one during one of their rest stops along their migration path. Least flycatchers feed on flies but also beetles, butterflies, and other insects.

Least bitterns are found mainly in the eastern half of the United States during the breeding months, and in a few spots near the west coast. They fly south to Central and South America for the winter. Though some winter in Southern Texas and Southern Florida.

These live in wetlands where they wade in brackish waters looking for fish or amphibians they can catch and eat. In the early summer you can look in swampy waters with tall vegetation like cattails if you want to spot one.

Named after the Lapland region of Scandinavia, Lapland longspurs are a common breeding songbird in North America. Slightly larger than American goldfinches in size, these migrating birds breed far north in tundra habitats across the arctic.

If you’re hoping to spot a Lapland longspur in the United States then you’ll have to do so in the winter. These birds flock together in huge numbers in the winter time, with some flocks estimated at 4 million birds.