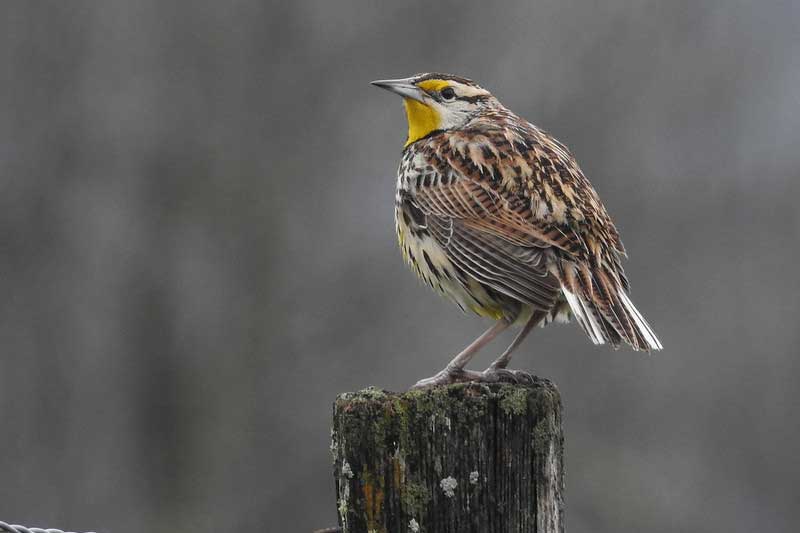 The birds on this list can be found all over the world. Some are so common, you might see them if you look out your window. However, some are so rare that you’d have to travel to remote parts of the world just to glimpse one. Enjoy learning about each of these birds that start with E.

15 Birds That Start With E

The eared dove is 9.4 inches long and weighs only 4 oz. It has olive-brown plumage with black spots on the wings, a black line behind the eye, and a blue-black line by the ear. It breeds four times a year. The average flight speed is 55 miles per hour.

Eared doves are named for the blue-black line by the ear.

Known for their beautiful blue wings, bluebirds are a favorite for many. They can be found throughout North America and have been spotted as far south as Nicaragua. In addition to their coloring, they are also known for their songs. They sing as many as 1,000 songs an hour.

Eastern bluebirds don’t have the strong beaks necessary to create nesting holes and use holes already created by stronger birds.

The eastern meadowlark has brown tail feathers, white outer feathers, and a yellow throat and breast. There is a prominent black “V” on its chest. It weighs up to 5.3 oz and can often be spotted flying close to the ground while searching for prey like grasshoppers.

Eastern meadowlarks build their thatch-domed nest on the ground hidden by a protective shield of tall grasses.

Next up on our list of birds that start with E is the eastern screech-owl with his yellow eyes, pointy ears, small neck, and a large head on a stocky body. It tends to be either gray or reddish-brown. Its complexion of spots and lines helps it blend in with trees. Its preferred habitat is in wooded areas close to water.

The name “screech-owl” is misleading because they don’t screech. Instead, they have a call that sounds more like a soft whinny. These little owls are found throughout most of the eastern half of the United States, from Texas eastward. 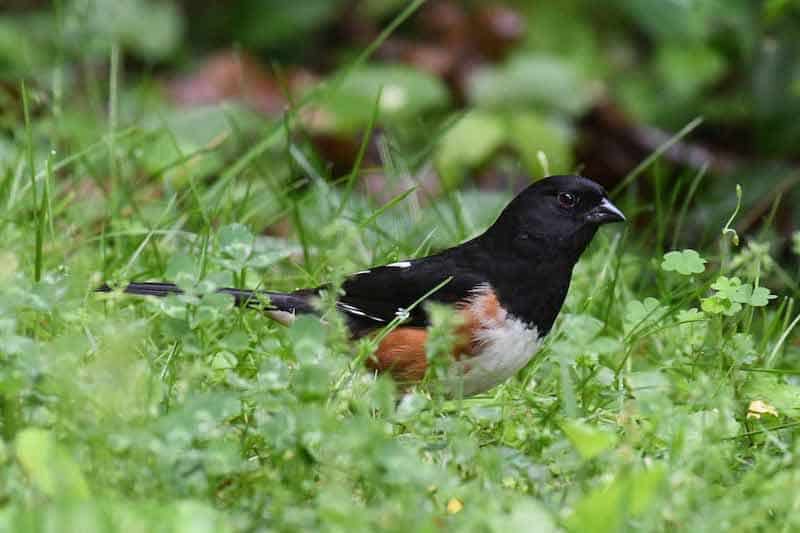 This bird is 9.1 inches in length and weighs up to 1.9 ounces. It lives mainly off a diet of insects, berries, and seeds. However, it has been known to eat small lizards. Its coloring features a black or brown head, orange/red sides, a white belly, and a dark tail.

Eastern towhees can have either white or red eyes. Here are some more interesting facts about eastern towhees.

The eastern wild turkey can grow to 3 feet tall and often weighs as much as 16 pounds. It is a social animal and lives in single-sex flocks that range in size from 5-50. It is remarkably speedy and capable of running up to 25 mph and flying 35 mph.

Eastern wild turkeys they have the largest distribution range of any wild turkey subspecies in North America.

This sleek bird makes its home in beachy areas where it has easy access to the northern anchovy, its main source of food. It has black legs, a thin beak, white breast, pale-gray wings, and a black cap on its head. It weighs between 6.7 and 11.5 ounces. This species is only common on the west coast of the United States, there are several species of tern present on the Atlantic and Gulf Coasts.

Fun fact about elegant terns: the black cap turns white during winter when the breeding season has ended.

This is a medium-sized bird ranging from 9.1 to 10.6 inches in length. A bright green fades to black on its tail/flight feathers. Its head is reddish-pink. When in flight, you can spot bands of black and white on its back. It lives in tropical forests and wet woodlands.

This rare gem can be identified by its bright green plumage and a tiny white spot behind the eye. It has a short needle-like black beak and a long tongue to help it access the nectar. It lives in tropical forests and the highlands of Central America and weighs only 0.10 oz.

Emerald-chinned hummingbirds are solitary, joining with other birds only for procreation during mating season.

This goose has a silver body, ink-black throat, white head, and orange legs. It spends breeding season in Russia before migrating to the Alaskan coast for the winter. You can find her nest in low grasslands close to the water where she has easy access to food during high tide.

Second only to the Brant goose, they’re the least social species of goose and only socializes with family outside of breeding season.

The emperor penguin has yellow ears and a sleek white and black feathery coat. It has specially adapted to the very harsh winter conditions of Antarctica with a thick layer of subdermal fat and several layers of scale-like feathers. It can swim as fast as 5.6 miles per hour.

Emperor penguins are the heaviest penguins alive today, weighing up to 90 pounds.

Second only to the ostrich, the emu is one of the tallest birds in the world. He has an average height of 5.7 feet and tiny wings which render him unable to fly. However, what he lacks in flight, the emu makes up for in speed, running up to 31 mph.

Interesting fact about emus: Males assume all duties of care for the eggs.

A tiny bird with a brown/gray body and gray head, the English sparrow is prolific in most parts of the world. The average English sparrow measures up to 6.3 inches long and weighs up to 1.39 oz. Its flight speed averages about 28.3 mph.

English sparrows prefer to nest in manmade structures such as street lights rather than naturally occurring nesting sites such as tree holes.

The European goldfinch is one of the most beautiful and colorful birds on the planet. It has a red face, soft brown back, and distinctive black and yellow wings. In the Fall, it will join up to 40 other goldfinches to form a flock. Its diet consists mainly of insects and seeds.

You can find European goldfinches featured in several famous paintings, including “Madonna of the Goldfinch” by Raphael.

Everett’s thrush is a rare bird that can be found only in Borneo. Its appearance is similar to a robin’s with its red belly and brown outer feathers. However, its beak is black and much bigger than a robin’s. It can be found on forest grounds foraging for its food.