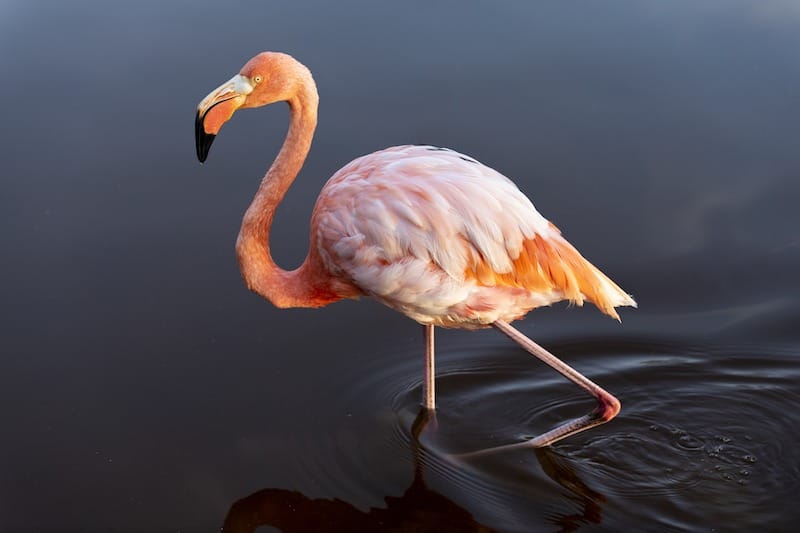 Birds That Start with F

Below is a list of 15 bird species whose name starts with F. Let’s take a look at these flashy, fantastic and fabulous birds!

Lives in: Central and South America

The fork-tailed flycatcher has brown wings, white underparts, a black cap, and extremely long forked tail feathers. The females tail is shorter than the males. As their name suggests they eat mainly insects but also sometimes supplement with fruit. Their super long tail allows them to quickly make sharp turns while flying so they can keep up with chasing their insect prey.

Interesting fact: They can reach speeds of up to 65 miles per hour.

Their large size, long neck and pink color have made the flamingo one of the most recognizable birds. They wading through water on their long legs, dipping their beaks into the water to filter out brine shrimp, algae, mollusks and crustaceans to eat. Their pink color comes from the red and orange pigments ingested through their diet.

Interesting fact: Zoos have used mirrors to improve flamingo breeding behavior. The mirrors are thought to give the flamingos the impression that they are in a larger flock than they are.

Known as the Guatemala Barred Owl, it is a fearless member of Central American cloud forests. It has a rounded head with no ear tufts, barring on its back and streaking down its belly. The beak and feet are yellow. Only the highest mountain ranges in the world can be home to this species. It stays at elevations ranging between 3,900 and 10,000 feet. Despite its nighttime habits, it is sometimes sighted during the daytime hours.

Interesting fact: In parts of Mexico this owl is considered a “messenger of death”.

Lives in: eastern United States with pockets in Mexico and Canada

Field sparrows have a buffy gray body with brown and white striping on the wing, a pink beak, a brown cap and brown spot behind the eye. These little sparrows are found in the eastern half of the U.S. in grasslands, prairies and fields, the more overgrown the better. Unfortunately their numbers have declined in many areas as these open fields have become suburbs, where they will not nest.

Interesting fact: Field sparrows will breed more than once in a season and build a new nest each time. Each nest is higher than the last, with the first nest of the year beginning on the ground.

The Falkland Steamer Duck has dark gray plumage with a white band behind its eye. Males have a bright orange bill while females and juveniles have an olive yellow bill. Their wings are so short they are unable to fly. They like to hang out around rocky islands and protected inlets and bays.

Interesting fact: The flapping motion of their wings and movements of their legs have the appearance of a paddle steamer, hence their name.

Lives in: southern Africa and small pockets in central Africa

The familiar chat is a small bird with a plain gray-brown back and head, and orange-brown on the rump and tail feathers. They breed south of the Sahara in rocky and mountainous habitat. They are pretty tame and don’t have much fear in approaching areas near people.

Interesting fact: They will scavenge all sorts of stuff off the ground to eat including human food scraps and pet food.

These cuckoos have a gray back and head, buffy orange breast, yellow ringed eye and white and black barring along the tail. For the most part, you can locate fan-tailed cuckoos in temperate woods, mangrove swamps, tropical or subtropical montane forests, pastures, orchards, and gardens.

Interesting fact: Like most other cuckoo species in Australia, the fan-tail will lay an egg in the nest of another bird species. The cuckoo baby will hatch earlier than the other eggs, and may push out the other eggs or chicks, ensuring the cuckoo chick will be taken care of.

Lives in: Arabia, the Middle East, North Africa, and southward to Kenya and Sudan

While the fan-tailed raven generally appears black, in favorable light you can see a glossy metallic sheen to their feathers that includes hues of blue and purple. The bird’s plumage can also take on a subtle coppery brown hue when after getting worn. They also have a patch of white feathers at the base of their neck, which if usually not visible.

Interesting fact: They like to soar and play in thermal updrafts.

Flammulated owls are very tiny, no bigger than a soda can. They can be brown or gray and their feathers are highly patterned to mimic the bark of trees, where they camouflage extremely well. These owls spend their time at the tops of tall pine and fir trees looking for insects.

Interesting fact: They have quite a large windpipe in proportion to their tiny size, which makes their hoot sound deeper in pitch. It is thought this help fool potential predators into thinking it is a much larger owl.

Bowerbirds are unique in that the males will build a structure out of various materials like sticks, flowers, leaves and anything else they can find that they like the color or shine of. They meticulously put together this structure to impress a female and win her favor for mating. You’ll spot this species in tropical forests, mangroves, savannas, and forest borders. Insects, fruits, and figs are the bulk of their diet. Females and males look similar with a grayish-brown speckled back and warm brown underparts.

Interesting fact: The fawn-breasted bowerbird builds it’s bower in a “U” shape and likes to decorate it with leaves and green fruits.

This adorable lovebird is a popular pet and member of the parrot family. Fischer’s lovebird has a lime green body, yellow chest, olive to orange head and reddish-orange beak. They they a featherless white ring round each eye. Males and females look exactly the same. These lovebirds, like all lovebirds, are quite vocal and their chirp is high pitched and noisy.

Interesting fact: As a pet they require a lot of room and if confined to a small cage they can develop poor health.

Lives in: United States, parts of Canada, coastal Mexico, and some coastal areas of the UK, Germany, France and Spain.

The forster’s tern is a medium sized tern with a slender build. In flight you can notice their long forked tail. Feet and legs are orange. During the breeding season they have an orange bill with a black tip, and a black cap (no shaggy crest at the back). In the nonbreeding season their beak turns dark and the forehead, top of the head and nape become mostly white while they retain a large black patch around the eyes. Underparts remain very white throughout.

Interesting fact: These terns hunt fish by circling and hovering over the water looking for their prey, then quickly dive and snatch the fish out of the water.

Lives in: United States and Canada

Fox sparrows are named after the rich red and orange coat of a fox. However only some fox sparrows have this coloring. Four distinct color groups exist that can look quite different from each other, Red, Sooty, Slate-colored and Thick-billed. These color variations occur in different regions in North America. They are a common sparrow but reclusive, preferring to stay in dense thickets and brush. They may come to backyard feeders to pick at the seed that has fallen to the ground, but are more likely to visit fruiting shrubs.

Interesting fact: some fox sparrows have been spotted in Greenland, Iceland, Ireland, Germany and Italy. It is thought some of these “vagrants” may have been resting on a transatlantic ship while at shore, and were inadvertently transported.

Most people in the U.S. probably don’t realize there are actually two types of crows in the east. The thing is, the fish crow looks nearly identical to the American crow. Fish crows tend to stay along the coast although they can also hang out inland along large rivers. One of the best ways to tell them apart from the American crow is their call. Fish crows have a much more nasal sound.

Interesting fact: If a fish crow finds a good source of food, it may cache (hide) some for later by covering it was grass or stuffing it in tree crevices.

The flicker is a medium to large sized woodpecker common in backyards. In my opinion they are also among some of the most colorful birds in North America.  Identify them by the black spots on their bellies, solid black bib, red patch on the back of their necks, and barred black and gray wings. Males have a “mustache” on their face next to their beak. There are two main color groups, the “yellow-shafted” in the east and the “red-shafted” in the west. There are also hybrids and other slight local variations.

Interesting fact: Flickers feed mainly on insects and unlike other woodpeckers, often like to find them on the ground rather than trees.